More than a year ago, I started a monthly feature to share some of my favorite things with y’all.

And today? I’m recapping all the stuff I loved in the month of February. This potluck includes a mish-mash of different things, and there aren’t too many products on this month’s love list, as Lady Baby and I were down and out for what felt like forever with a double ear infection (her) and an upper respiratory infection that would not quit (me). The good news is we’re both feeling better, and I cannot believe it is MARCH! 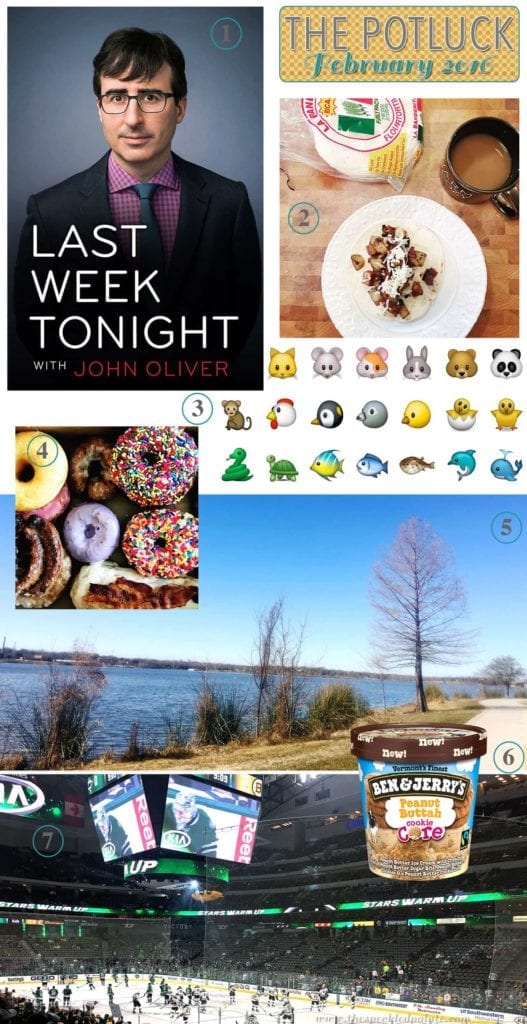 1. Last Week Tonight with John Oliver: John Oliver is back, and he’s better than ever. Seriously. I love this show, his point of view and how he presents topics, whether the main story might be a presidential candidate or voting reform. If I was still working in journalism and lived in NYC, I’d be first in line to intern or volunteer or do anything involving this show because while a lot of Oliver’s charm is in his humor, he finds ways to cover hard-hitting subjects and drops a lot of knowledge during each week’s main story.

2. Tacos: I’ve recently been told I have a “taco problem.” (As if this is a problem.) The thing is… we ate and made a ton of tacos in the month of February, and I felt like this TexMex favorite needed to be included in my list because they’re a favorite thing. And I clearly need to make more of them for the blog. So y’all? Please hold me accountable.

3. Emoji conversations: I’m suuuuuuper late to the emoji game, but emojis were some of my favorite things during February, simply because they’re fun.

4. Baby get-togethers and playdates: They oftentimes involve donuts or beer, and I love this. As Lady Baby grows, we spend less time in our house and more time out in the world. During the month of February, we socialized with several different friends during the weekdays and weekends. Playgroups, walks and baby brunch dates all happened, and I look forward to more of these in the future because they make our days so lovely!

5. Beautiful weather: It was startlingly sunny and balmy for February in Dallas, and we took advantage of the gorgeous weather. We walked a lot, we went to the park, we moseyed around the lake, and it was all fabulous. Now the real question is if this weather will stick around or if we’ll have a cold snap before spring arrives. (I’m betting on a cold snap the weekend of Lady Baby’s birthday party.)

6. Ben and Jerry’s Peanut Buttah Cookie Core Ice Cream: OMG gimme. I discovered this ice cream late in the month and cannot get enough of it. Peanut butter, cookies AND ice cream together? Yeaaaaaah. Pints of this Ben and Jerry’s flavor are dangerous and delicious.

7. Hockey games in person: We attended two Stars games in person during the month of February, and both were a blast, even though the Stars got slaughtered. We miiiiiight be bad luck (but hopefully not!). After all, the team DID score two goals in the span of 5 minutes after we cheered for them in the tunnel with our alumni group, and Antoine Roussel endeared himself to us by being the only player who offered fist bumps. Hopefully, we’ll get to see more games in person in the near future, and our team will do better…

What did you love in the month of February?