Last month, I started a new feature to share some of my favorite things. And I’d like to think that our little potluck went over well.

To recap, Merriam-Webster defines a potluck as…

I’m obviously going for a potluck of the latter definition here, though I’ll occasionally share food links and love.

Every month, I’m compiling a list of some of my favorite things. While they might not come together to be a traditional “meal,” I want to provide some different and interesting stuff (products/entertainment/links/etc.) I’ve been loving in the hopes that y’all will enjoy them, too.

Here’s what I’ve loved during November: 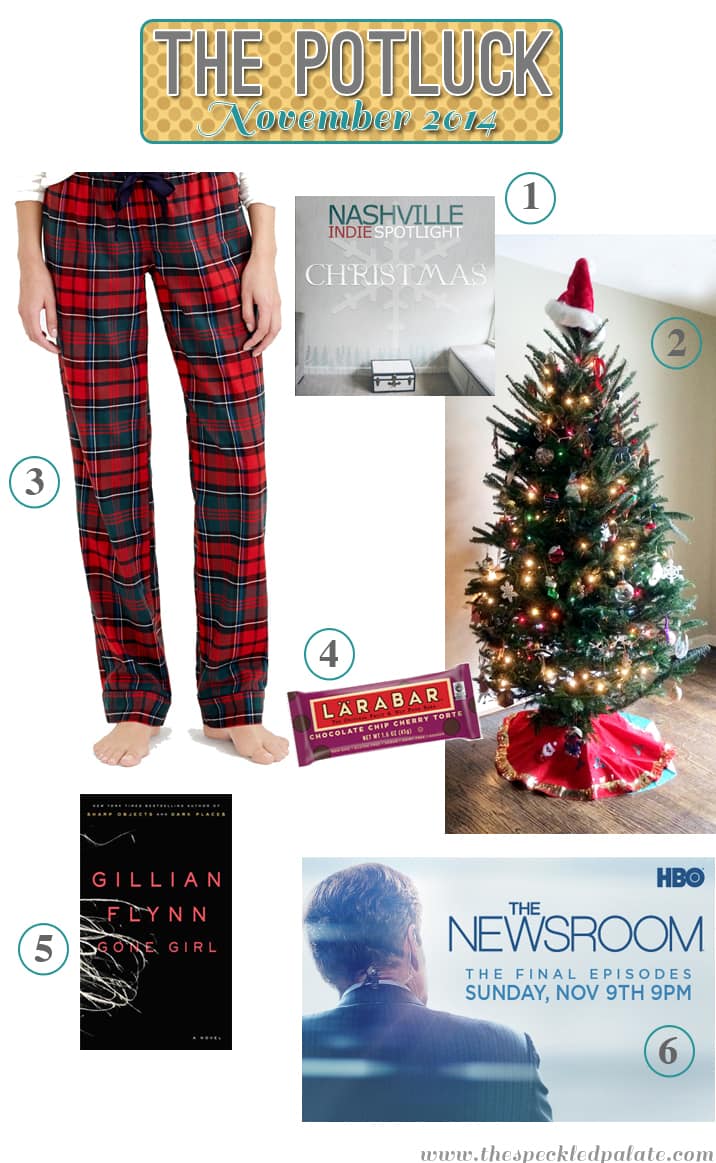 1. Nashville Indie Spotlight Christmas: I generally don’t give in and listen to Christmas music before Thanksgiving. This year, I did, and I’m really glad. This album got me in the Christmas spirit early, with catchy new Christmas tunes to classics from some of my favorite independent artists based out of Nashville. I’ll definitely keep listening to this throughout December, too!

2. Preparing for the holidays: I’m thrilled to be decorating my home and feeling the excitement of the season now that it’s officially upon us. I’ve been plotting out Christmas presents, and it feels good to have these products arriving on my doorstep. (Online shopping is my fave, y’all.) Now, we’ve just got to get our tree and the rest of the decorations up, and I should get to wrapping those presents!

3. J.Crew Flannel Pajama Pants: These are some of the the only non-pregnancy pants I can wear these days. These pajama pants, a Christmas present last year, are still oh-so-comfortable.

4. Chocolate Chip Cherry Torte Larabars: For those nights I wake up and desperately need to eat without rolling myself out of bed… or for those mornings that I don’t want to get out of bed to make myself food. I keep these beauts on my bedside table, and they are a lifesaver. I even ordered in bulk because, well, they’re really tasty, and I’m not one to turn my nose up at a good midnight snack food.

5. Gone Girl by Gillian Flynn: When I revealed to a friend that I was listening to this book during morning walks with my pup, she told me, “You’re gonna start taking some long walks because things get crazy.” Unsurprisingly, that very thing happened, and I was incredibly sad when this book ended, even though I didn’t particularly like either of the main characters. I was just so drawn in by their stories that I couldn’t stop. … Have you read this? What did you follow it up with?

6. The Newsroom: Even though the revamped theme song stresses me out, I’m still adoring this show and am sad that it’s in its final season. As a person who has a journalism degree and spent a large swath of her life inside a newsroom, I was immediately hooked, and I still love it. The relationships formed in the newsroom hold true on the show, and that makes me really happy because something about covering the news brings people together, even if their opinions aren’t always in line. And then Sunday’s episode… Wow. Thoughts?

What did you love during the month of November? What are you digging so far in December?