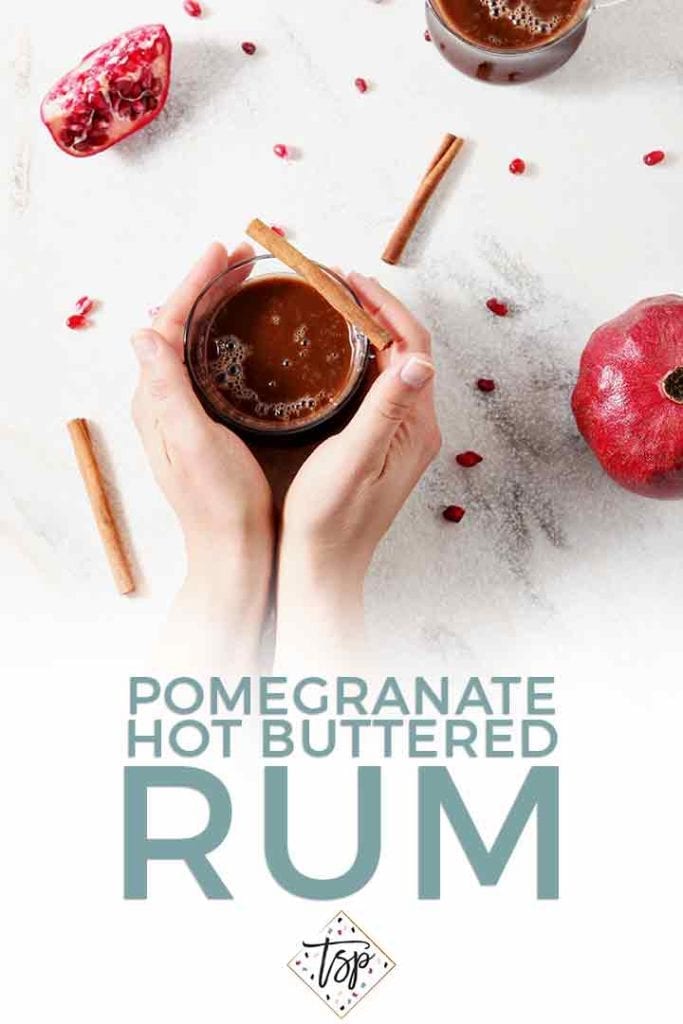 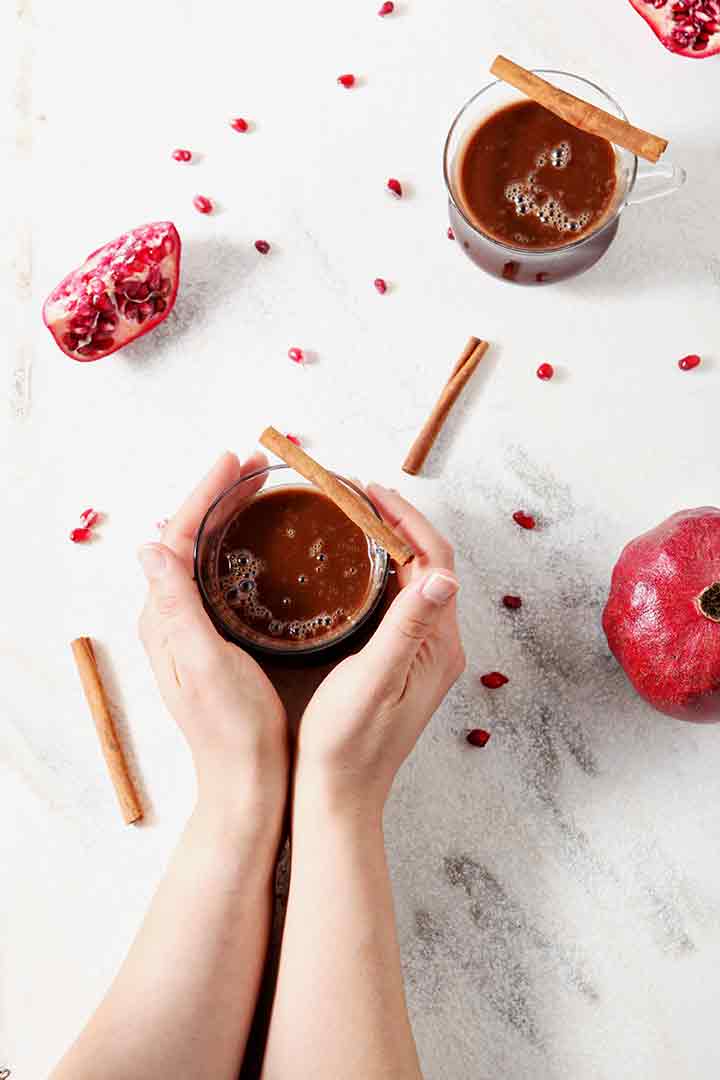 Y’all. This recipe is more than a year in the making.

And before you’re all, “What do you mean? It took you a year to perfect Pomegranate Hot Buttered Rum? What is WRONG with you, woman?” let me tell you… it goes back to the rum and the timing.

In December of 2017, I was struck with the idea to make infused pomegranate rum. But the rum took longer than expected, so the pitcher pomegranate orange mojitos I’d planned for our New Year’s Day party didn’t happen.

And then I took a pregnancy test the next day.

The rest, as they say, is history. 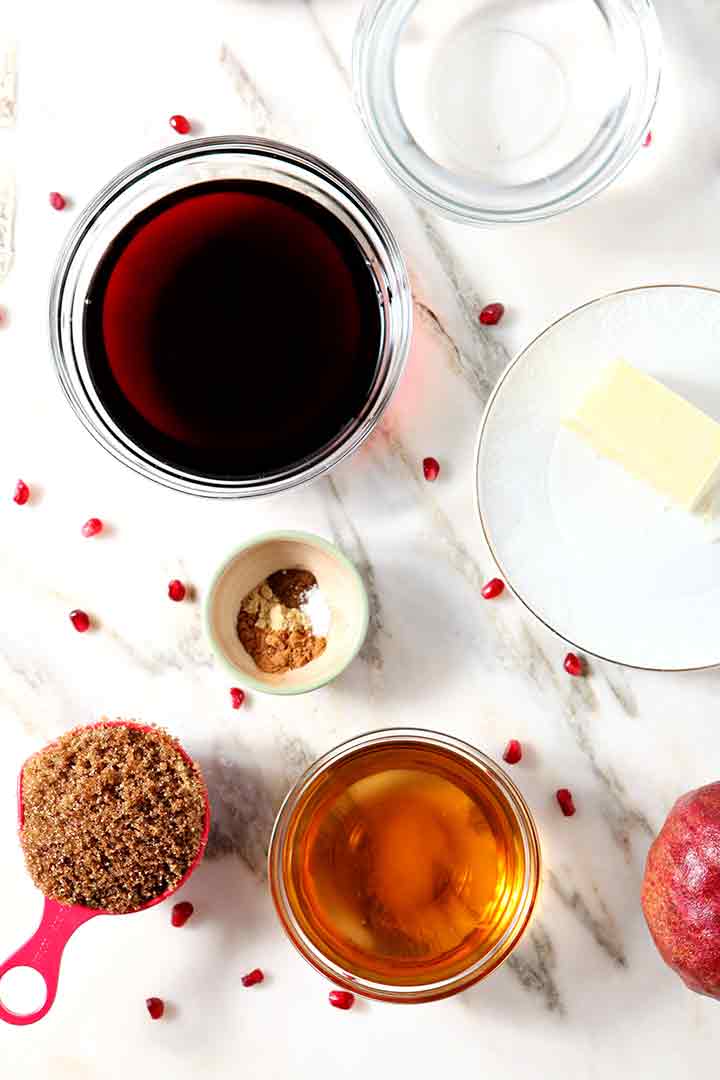 Since I was pregnant with Lady Speckle, my production of boozy goods on this here blog dropped dramatically. And after she arrived, I still wasn’t feeling all the boozy goodness, so the rum was put on hold once again.

So now, more than a year after the original idea was conceived, I’m here to share the rum AND a mixed drink with you.

And it’s all kinds of perfect for the weird rainy-cold weather we’ve experienced here in Dallas recently. 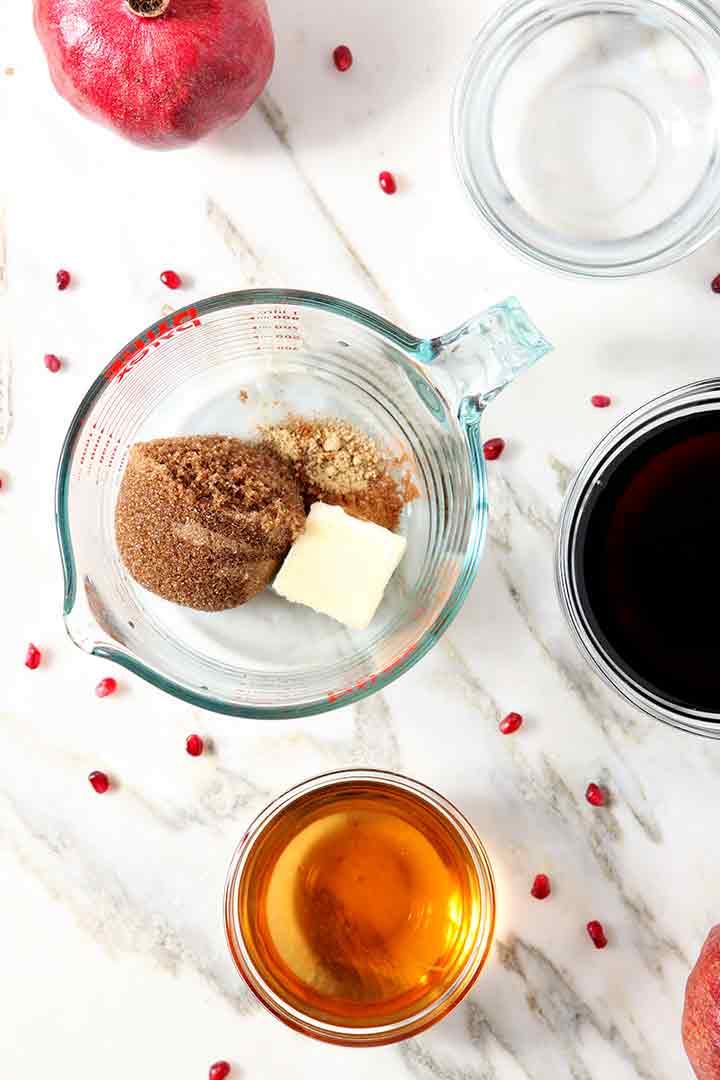 What is hot buttered rum?

Hot buttered rum is a mixed drink that contains rum, butter, hot water, a little sweetness and some spices. Generally, it is enjoyed during the fall and winter months, especially during the holiday season.

This drink’s history goes back to Europe, where spiced, spiked drinks have been served for centuries to warm people from the cold. 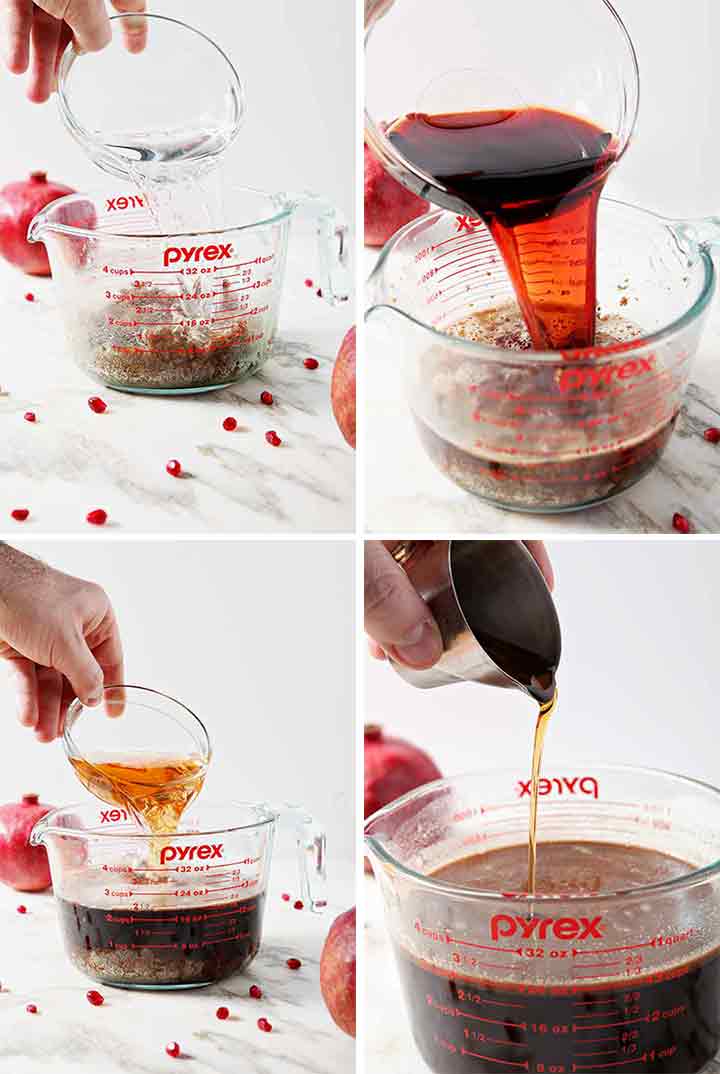 Why did you add pomegranate to your hot buttered rum recipe?

Pomegranate, to me, is the ultimate wintertime fruit, and I wanted to showcase it in a unique way.

In this drink, I’ve added both pomegranate juice and pomegranate-infused rum.

Don’t want to infuse the rum? Use regular rum.

Want to take that time and infuse the rum? It’s even more decadent! 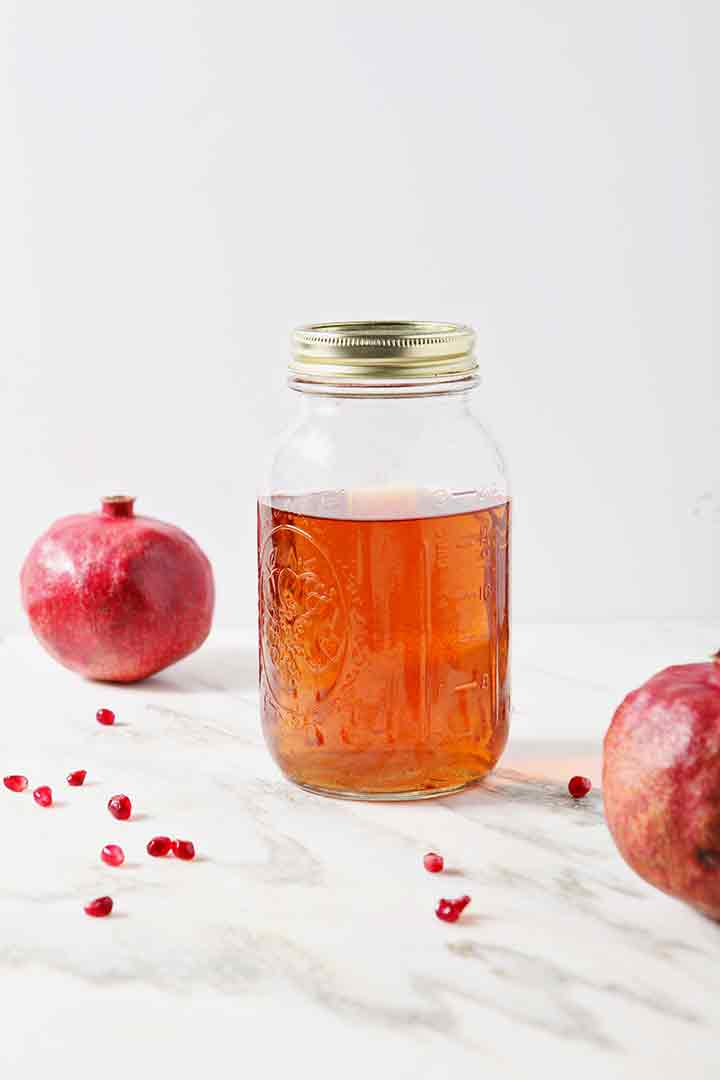 How do you infuse rum with pomegranate?

Pour a specified amount of rum into a mason jar.

Cover with the mason jar lid, shake, and set aside. Let it infuse for 1-2 weeks, or until the pomegranate arils are white and the liquor is a rusty red color.

Strain the pomegranate seeds, seal the rum in a jar, and you’re good to go! 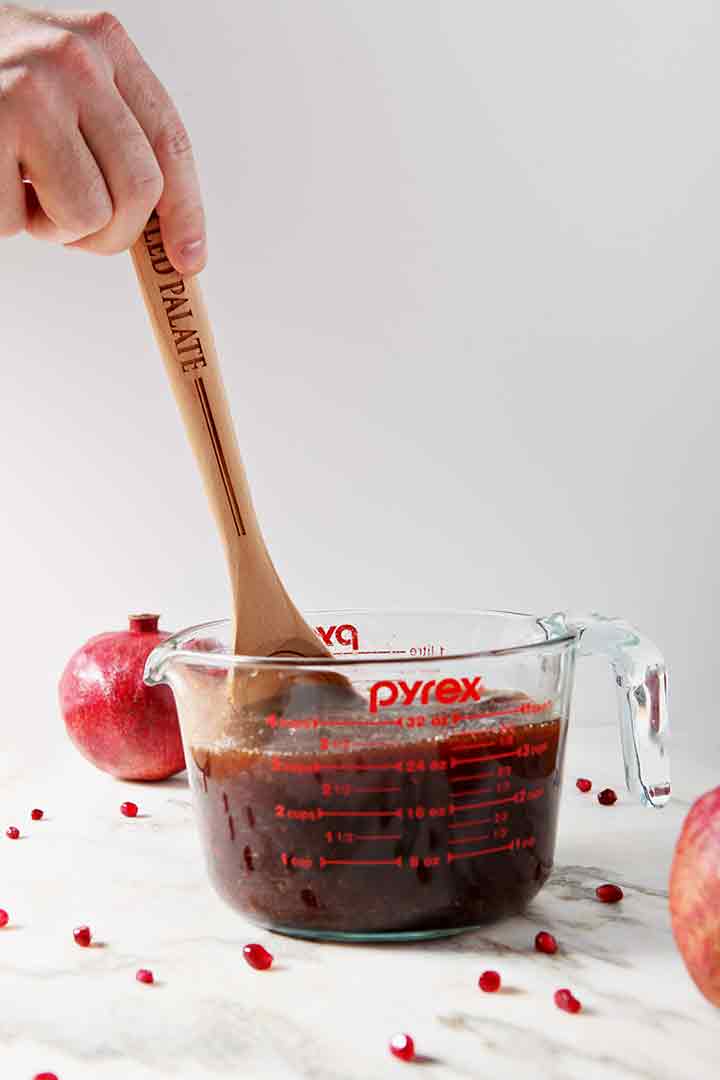 Can I double or triple this recipe for a crowd?

Absolutely! Just use math to double or triple the recipe.

If you don’t have a jar or measuring cup large enough, you can make it in smaller batches to ensure that you don’t spill it everywhere. 😉 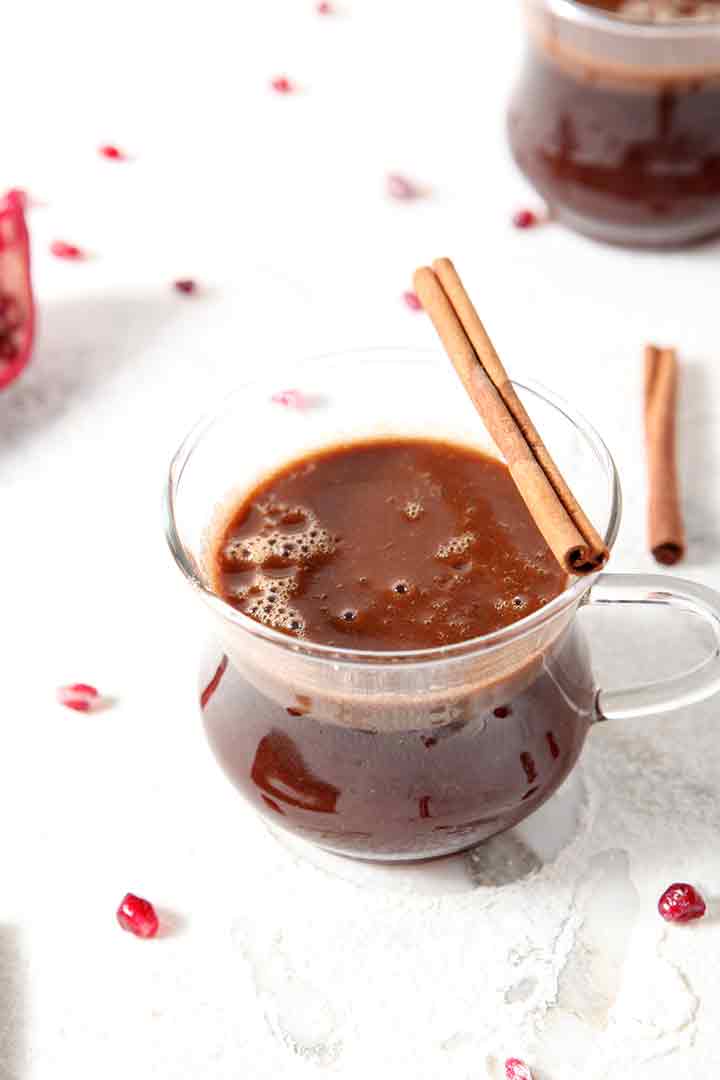 Can I make this hot buttered rum in advance for a party?

You can partially make this mixed drink in advance for a party.

Here’s what I advise: Mix the brown sugar/butter mixture with the spices in advance, and let it hang out before guests arrive.

In another mixing bowl, combine the pomegranate juice, rum and maple syrup, and then keep it chilled.

When it’s time to serve guests, heat the water to a boil, and add it to the brown sugar/butter mixture, then add in the other liquids and divide to serve. 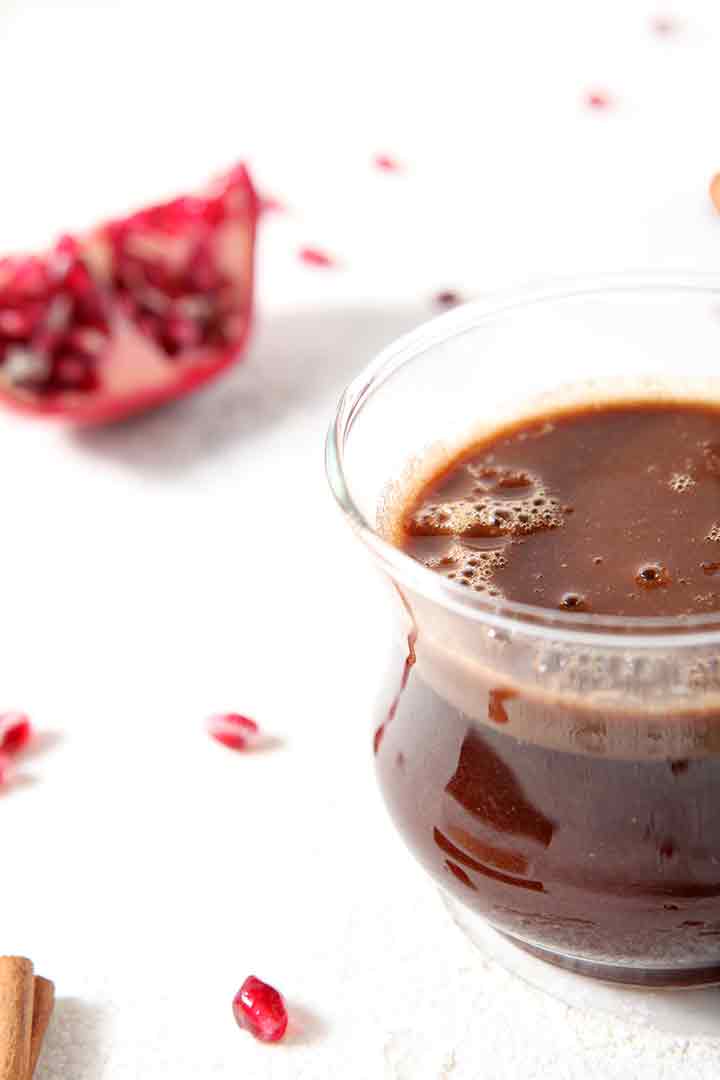 Do I have to infuse the rum to make this recipe?

No! If you don’t have time to infuse the rum or that’s too extra for you, simply use white rum (or spiced rum for some extra kick!) in its place. 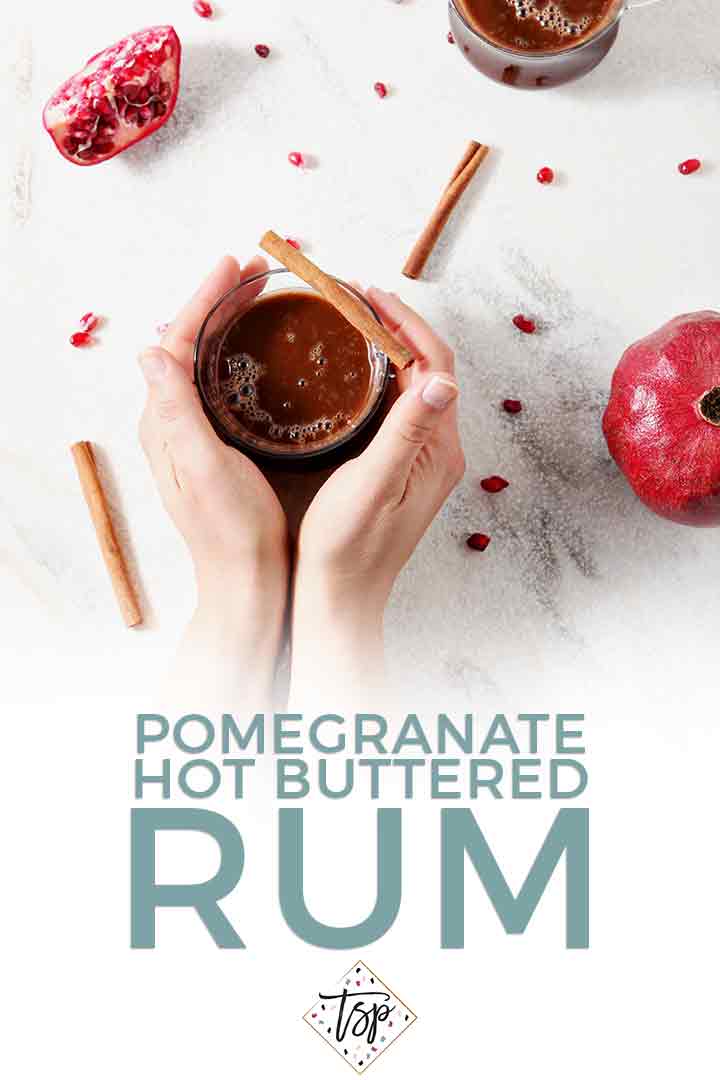 What are some other cold weather drinks I can make for a gathering?

What do I need to make Pomegranate Hot Buttered Rum?

Recipe adapted from the Rachael Ray.

Total time does NOT include infusion time for the rum.

This recipe can be easily doubled or tripled to serve a crowd. Use simple math, or make the recipe however many times in a row to ensure you don’t spill ingredients and/or do the math wrong. (I advise just doing it a few times in a row because I’ve made math mistakes when calculating recipes, and it’s a sad, sad state of affairs when that happens.)

Easy Entertaining Tip: Infuse your rum in advance. (Duh.) Mix the brown sugar/butter mixture with the spices in advance, and let it hang out before guests arrive. Mix the pomegranate juice, rum and maple syrup in another mixing bowl, and keep chilled. When it’s time to serve guests, heat the water to a boil, and add it to the brown sugar/butter mixture, then add in the other liquids and divide to serve.

Substitution Tip: You can use white rum or spiced rum in place of the pomegranate-infused rum if you don’t have time to do that and/or any desire to do that. I get that it’s a bit more work, and while it makes this drink special, it’s not required for it to be delicious. (I lean toward the spiced rum because the spices blend so beautifully with the other spices used here!) 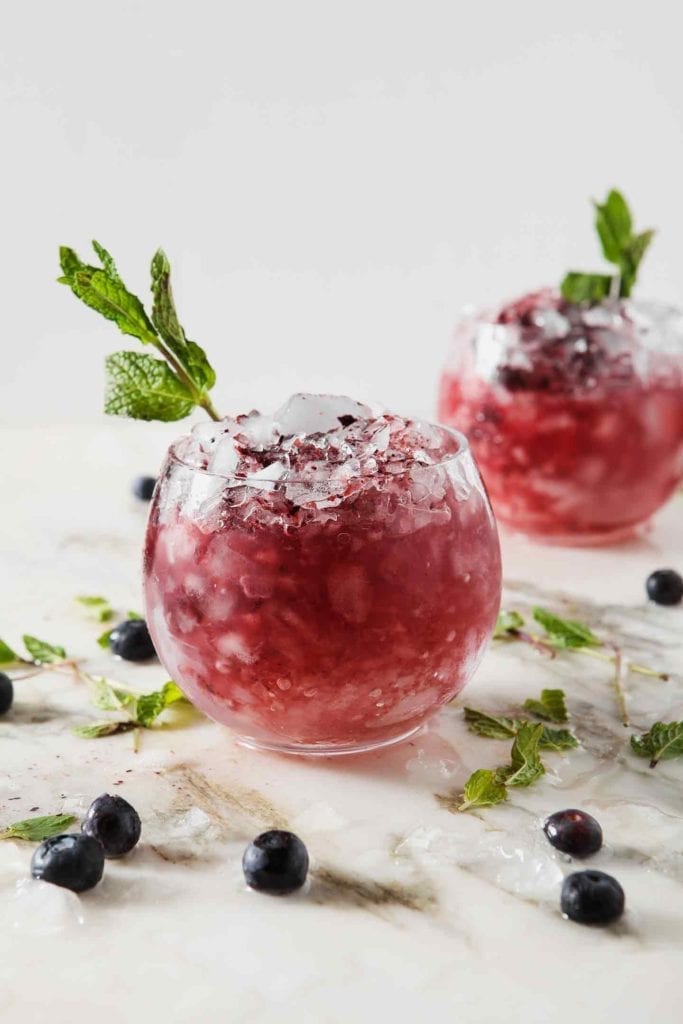 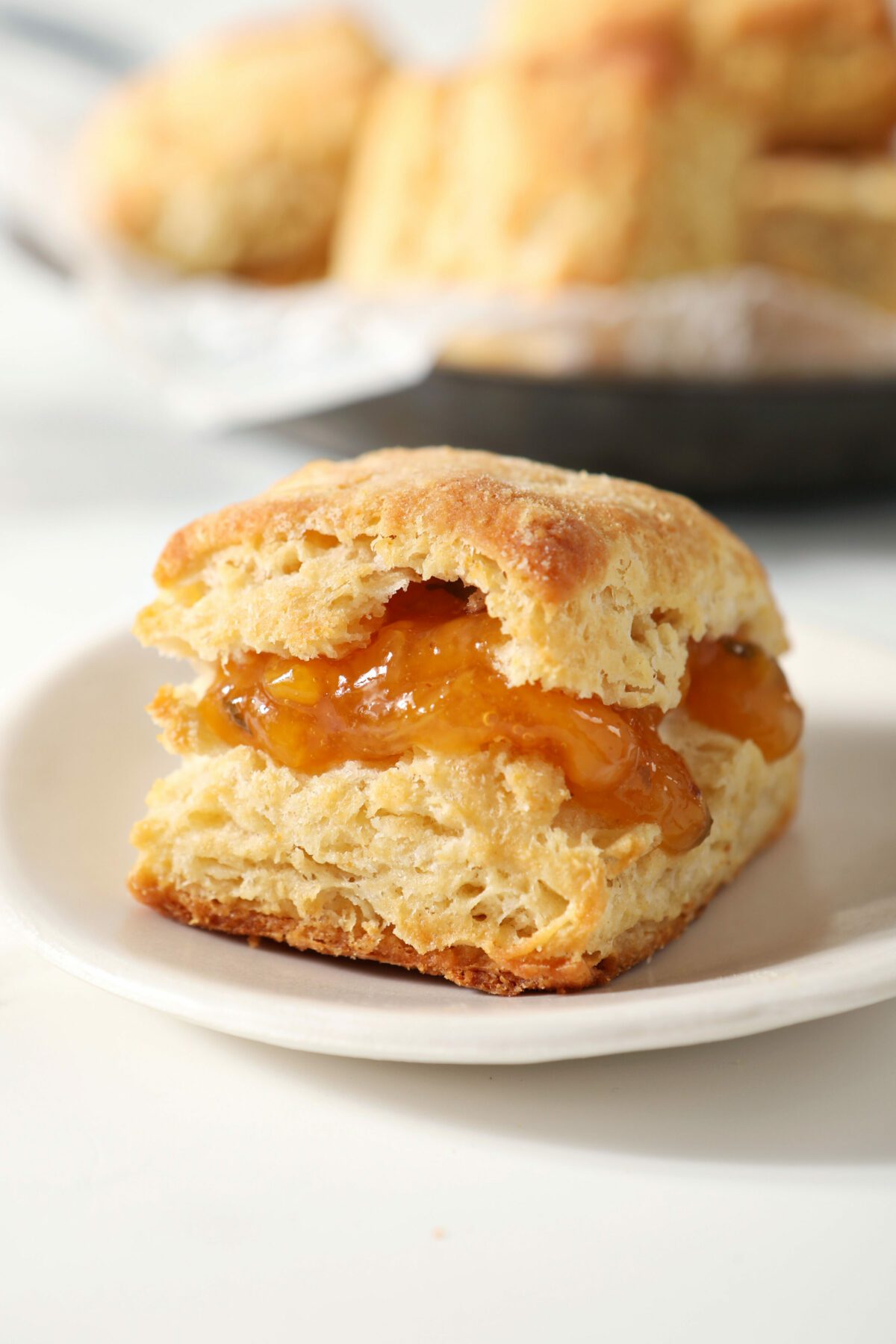 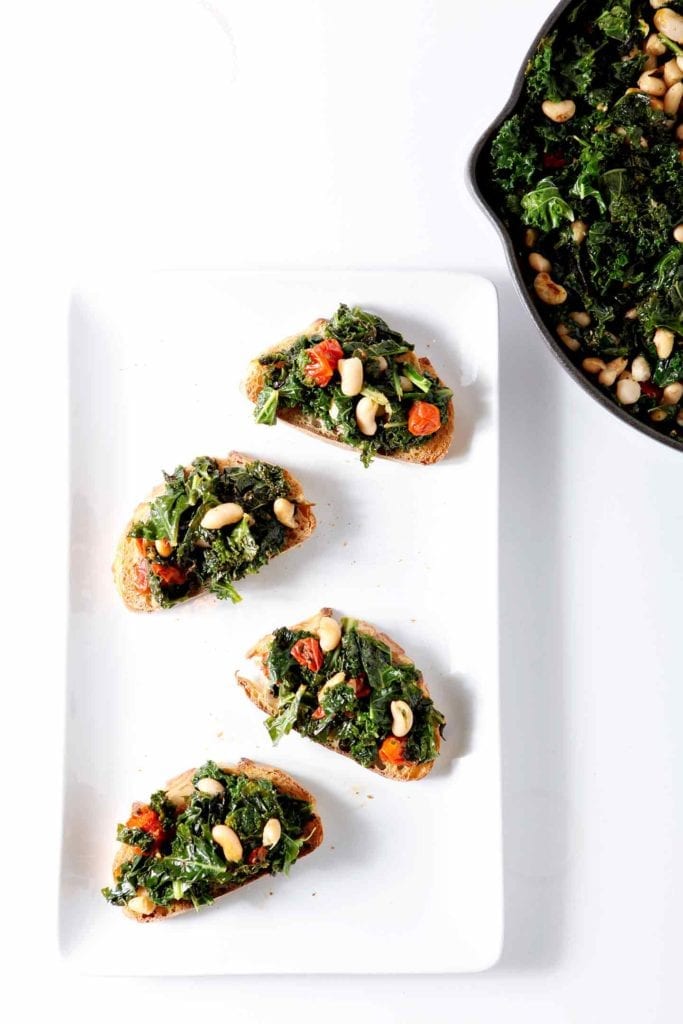