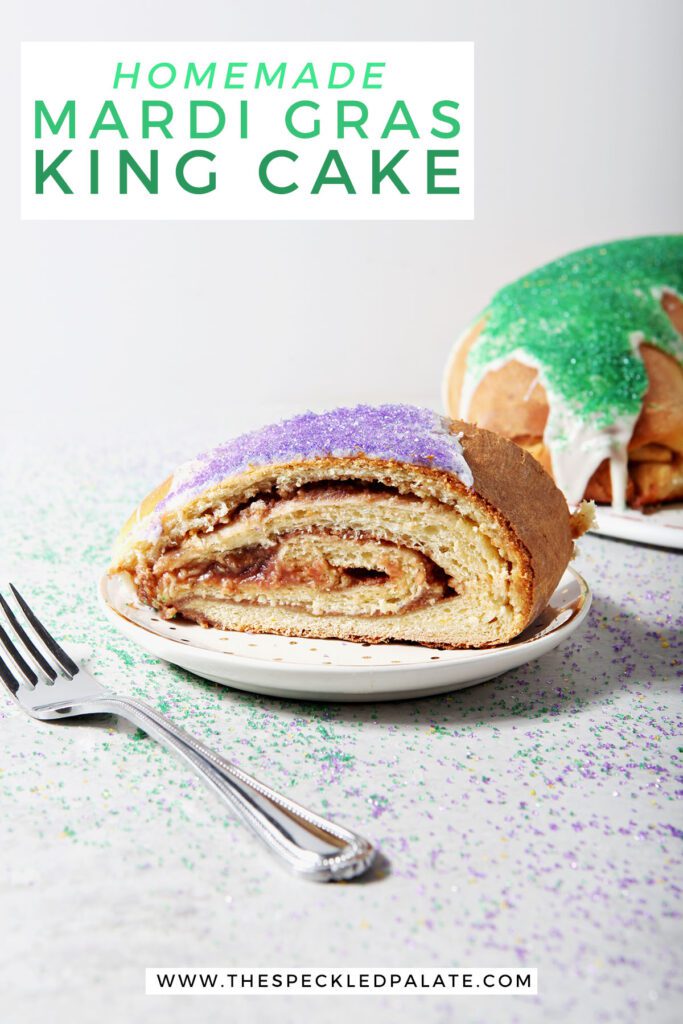 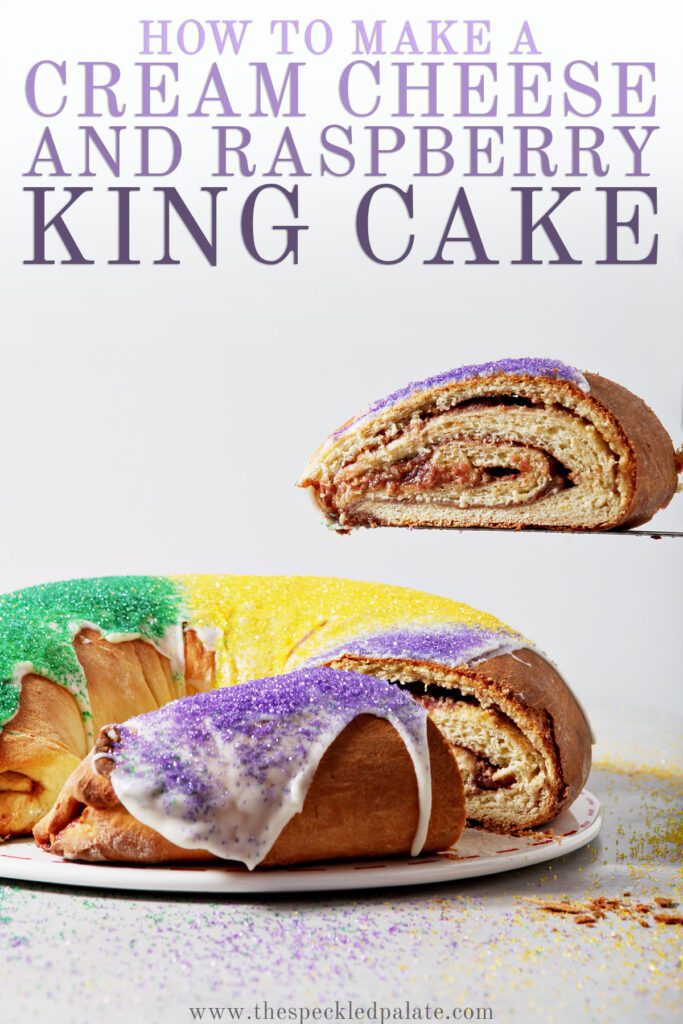 Celebrate Mardi Gras by baking a Cream Cheese Raspberry King Cake for friends and family! This king cake recipe, which is a traditional pastry made and shared during Carnival season, is easier to make at home than you’d think. All it takes is time and patience. Makes 1 large king cake.

This Cream Cheese and Raspberry King Cake was originally published on February 28, 2014. It was updated in January 2022 to include more detailed information, as well as a recipe video.

I knew nothing about Mardi Gras, minus a terrible fifth grade party that involved a super dry cinnamon roll/king cake situation… until I moved to South Louisiana for college.

In fact, my first Carnival season, I was offered a slice of king cake from a friend, and I kindly refused. She, of course, foisted a plate of king cake onto me… and I skeptically took a bite as she and several of our other friends watched the scene with barely concealed excitement.

This cake was nothing like that disgusting cinnamon roll I was served so many years before. In fact, it was bursting at the seams with strawberry filling because a strawberry king cake is, indeed, a thing!

I quickly changed my tune because this cake was filled to the brim with flavor, and I was in love at first bite.

Before we begin: What is a King Cake?

A king cake is a traditional pastry made and served during Carnival season. It’s a cake rolled in layers, similar to a cinnamon roll. Traditional king cakes are are filled with a cinnamon-sugar mixture. However, bakeries make fancier king cakes, too, offering fillings that include jams, cream cheese, pralines and the like.

According to Manny Randazzo, people think the king cake tradition was brought to New Orleans from France in the late 1800’s.

What is the history behind a King Cake?

King cakes are associated with the festival of Epiphany at the end of the Christmas season. On the Twelfth Night after Christmas (January 6), Carnival season officially begins because Jesus first showed himself to the three wise men and to the world on the Twelfth Night.

(Did you know the word ‘epiphany’ comes from Greek and means “to show?”)

As a symbol of the Twelfth Night, a small plastic baby is placed inside each cake after baking.

Whenever king cake is eaten at a party, each person checks to see if their piece contains the baby. If it does, that person is responsible for providing the king cake at the next party. Some also say the baby brings good luck.

This King Cake recipe contains a combination of my two favorite fillings: raspberry and cream cheese. Something about these together just makes the cake so delicious, and this recipe has always been well-loved.

And since I shared this recipe first in 2014, it’s been a favorite ever since because sadly, we cannot get authentic King Cakes here in Dallas.

So if you’re in the same boat as me, feel free to make this. It tastes like Carnival!

If you would rather a different type of filling, have at it! Pralined pecans pair beautifully with the cream cheese, as does any other jam you might be into.

Scroll on down to learn exactly what this special pastry is, what you need to bake one, how to bake it, king cake tradition and more!

Need some more Mardi Gras cooking inspiration? Head on over to find 18 Mardi Gras Recipes to Make This Carnival Season!

What tools and specialty items do I need to make a king cake at home?

In addition to these tools, you’re going to need some ingredients, too. They are as follows:

How do you make this King Cake recipe?

I have to start off by saying this: If you’re looking for a quick and easy king cake recipe, this recipe IS easy, but it is time-consuming. Kindly hop on over to my Praline Pull-Apart King Cake recipe for a quick, tasty king cake that takes significantly less time and calls for some store-bought ingredients to make the process easier.

Interested in the version that takes a little more time? Well, let’s go!

You start by blooming the yeast in warm water. The key is warm water, not scorching hot, because the hot water could kill the yeast.

From there, you’ll combine the scalded milk, sugar, butter, salt, vanilla extract, orange zest and orange juice in the bowl of a stand mixer. Using the whisk attachment, mix until the butter has melted.

Next, replace the whisk attachment with the dough hook and stir in some flour, then add the yeast mixture and the eggs… and mix it some more.

Knead the dough and let it rise

Then comes the rest of the flour and kneading. You can do the kneading by hand or in the stand mixer. Either way, it’ll take about 5-10 minutes for the dough to become smooth and pliable. (Just know it might take a bit more time when doing it by hand, but it’s a fun exercise for sure!)

Once the dough is ready, transfer it to a greased bowl, cover with plastic wrap and let that baby rise! This will be the first of two rises.

While the dough does its first rise, you’ll mix up the fillings, which are a cinnamon-sugar mixture, a cream cheese mixture and raspberry jam. (No, you don’t have to make the jam. You’re welcome.)

Roll the dough, shape the cake and let it rise

Once the dough has doubled in size, sprinkle a flat work surface with flour. Roll the dough into a rectangle with your favorite rolling pin. Spread the cinnamon-sugar mixture on top of it. Then smear on the cream cheese mixture, as well as the raspberry jam.

Roll it up like a jelly roll or a cinnamon roll. But instead of slicing it, curve it to form a ring. This part might get a little messy, and that’s OK.

Then set it in a warm place for its second rise, which will take another 60-90 minutes.

After the second rise, you brush the dough with heavy whipping cream, pop it into the oven and bake until golden brown and delicious.

Drizzle with a simple orange-powdered sugar icing, and voila! (You can color the icing using food coloring or use colored sanding sugar to add purple, gold and green to the cake. Your call!)

If you don’t live in South Louisiana or Mobile, chances are Mardi Gras celebrations are hard to come by in your town.

As someone who adores at-home entertaining and hospitality, I think Mardi Gras is a fabulous time to host a dinner party and finish the night off with this Raspberry Cream Cheese King Cake recipe.

Here’s are some tips and tricks to hosting folks for Mardi Gras:

Did you know Mardi Gras is a family-friendly affair (in some areas of town)? Many families will make costumes for Fat Tuesday. When I attended with a roommate and her family, we made costumes for ourselves on Lundi Monday while indulging in their king cake tradition: tasting different New Orleans king cakes from all over town! Most revelers choose costumes based on current events, and it makes for spectacular people watching on Fat Tuesday! We went as snowflakes because it snowed in New Orleans the Christmas before that Mardi Gras.

What makes a king cake different than another type of cake?

A king cake is not a traditional baked good. It’s more similar to a cinnamon roll or a pastry than it is a traditional cake. Like a bread or a pastry, the king cake calls for yeast and requires two rises to create fluffy, flavorful layers.

Fun fact: it’s not baked in a cake pan. You bake it on a baking sheet!

How do you make this King Cake filling recipe?

This King Cake technically has three fillings—the cinnamon-sugar layer, the cream cheese layer and the raspberry jam. I mix them in different bowls.

Drizzle a little bit of water on top of cinnamon and sugar to make that layer.

For the cream cheese, combine softened cream cheese, sugar, egg yolks and vanilla extract in another bowl. You can mix it by hand or with a hand mixer. Either works. (Though if you want is smoother, I recommend the hand mixer.)

What are some other filling options?

The world is your oyster with this. You could do any kind of combination that sounds good.

Cream cheese + fruit jam is a favorite of mine, hence why I developed this recipe.

So if you don’t like raspberry, use strawberry, blueberry, blackberry, mixed berry, etc., in its place. Also, pecans and brown sugar would be an awesome filling for this type of king cake.

Quick tips and tricks to the best homemade king cake

Celebrate Mardi Gras by baking a homemade Cream Cheese and Raspberry King Cake for friends and family! This stuffed king cake, which offers a cinnamon-sugar layer, then a combined cream cheese and raspberry layer, is a favorite of ours!

Roll and Fill the King Cake

If you want a different filling, feel free to swap the raspberry jam with strawberry, blueberry or mixed berry jam. If you don't like cream cheese, skip that and just use the jam of your liking!

Have you tried this recipe? If so, will you leave and comment and star rating below?