Blackened Shrimp Tacos with a crunchy coleslaw are the BEST meal to make for dinner tonight or at a tailgate (or an at-home tailgate party)! These Blackened Shrimp Tacos, seasoned with homemade blackening seasoning, are topped with a sweet-crunchy slaw and are easy to make on the go if you want to serve them at a tailgate. Makes 10 tacos, but the recipe is easily doubled or tripled.

We’re a little bit excited about football season and all that comes with it–and that includes the Saints, too!

I want to talk tailgating today, what with the season about to begin, and I’ve teamed up with 63 of my food blogger friends to bring y’all 64 new tailgating recipes.

As a football fan whose teams hail from South Louisiana, I wanted to make a rendition of one of my favorite dishes that I always eat when I visit New Orleans: the Blackened Shrimp Poboy.

I took that favorite dish, did my food blogger thing and transformed it into a taco. I also added a slightly sweet, slaw, just because.

Why are tacos great for tailgating?

These Blackened Shrimp Tacos are not something you would see at a traditional tailgate… but I like to think they still belong on the tailgate scene, too!

I’ve eaten my fair share of tacos at tailgates, and I adore them. Also, tacos might be my love language, and I’m totally OK with that.

What you’ll need to make this recipe

In addition to these tools, you’re obviously going to need some ingredients for the tacos, as well.

How to make Blackened Shrimp Tacos

Make the dressing. Combine the olive oil, vinegar, honey, pepper and salt in a mason jar. Shake until well mixed, then set aside.

Toss together. In a large bowl, toss the coleslaw in the dressing. Sprinkle the toasted ramen noodles on top.

Peel and devein the shrimp. This takes a bit of time and effort and will likely be the portion of this recipe that takes the longest. Place the shrimp peels in a plastic bag and take them to an outdoor garbage can immediately once done.

Make the blackening seasoning. Combine the paprika, chili powder, garlic powder, black pepper, oregano, basil, cayenne and salt in a small bowl to make the spice blend. Stir until mixed, then set aside.

If you don’t have the ingredients to make the blackening seasoning, consider using a store-bought Cajun or Creole seasoning. They should be very similar to this!

Season the shrimp. Place the shrimp. Sprinkle on the homemade blackening seasoning. Toss until all shrimp are coated.

Please note that the seasoning will be thick. Don’t worry that this will be too much—it makes the shrimp delicious!

Layer a helping of the prepared coleslaw into the warmed tortilla

Top with the blackened shrimp. Serve with lime wedges.

How to make Blackened Shrimp Tacos at a tailgate

Prep the shrimp taco ingredients. This means deveining and peeling the shrimp, as well as making the homemade blackening seasoning. Place the seasoning in a small to-go container so it can easily be brought along. Store the shrimp in a storage container in the fridge, and make sure it stays cold during transport.

Prep and make the coleslaw ingredients. Shred the cabbage. Toast the almonds and ramen noodles. Make the dressing.

Plan to mix the ingredients just before serving.

How to cook shrimp at a tailgate: Cook the shrimp directly onto the grill, similar to these Grilled Shrimp Skewers. If your shrimp are too small, bring along a skillet and cook them in the skillet on the grill to prevent them from falling through the grates!

If you want to add lime juice, give the shrimp a spritz of it before making the tacos so guests don’t have to worry about lime wedges.

Warm the tortillas directly on the grill.

Serve the shrimp tacos. Layer on the slaw, then top with the shrimp. Wrap in foil or parchment paper so guests can bring the tacos on-the-go or serve on small appetizer plates so they are easily held in hand.

How do you make blackened seasoning stick?

The seasoning should stick to the shrimp because it will be slightly wet after peeling. If you have a had time getting it to stick, add a drizzle of oil or melted butter, then toss until coated.

What do I serve with blackened shrimp?

There are so many things you can pair with blackened shrimp! You could put it on Cajun Chicken Alfredo (but leave off the chicken) or even serve it on a salad, like this Grilled Shrimp Salad with Homemade Lime Vinaigrette.

Can you cook frozen shrimp?

I do not recommend cooking frozen shrimp in this method. The shrimp needs to be defrosted before you cook it. 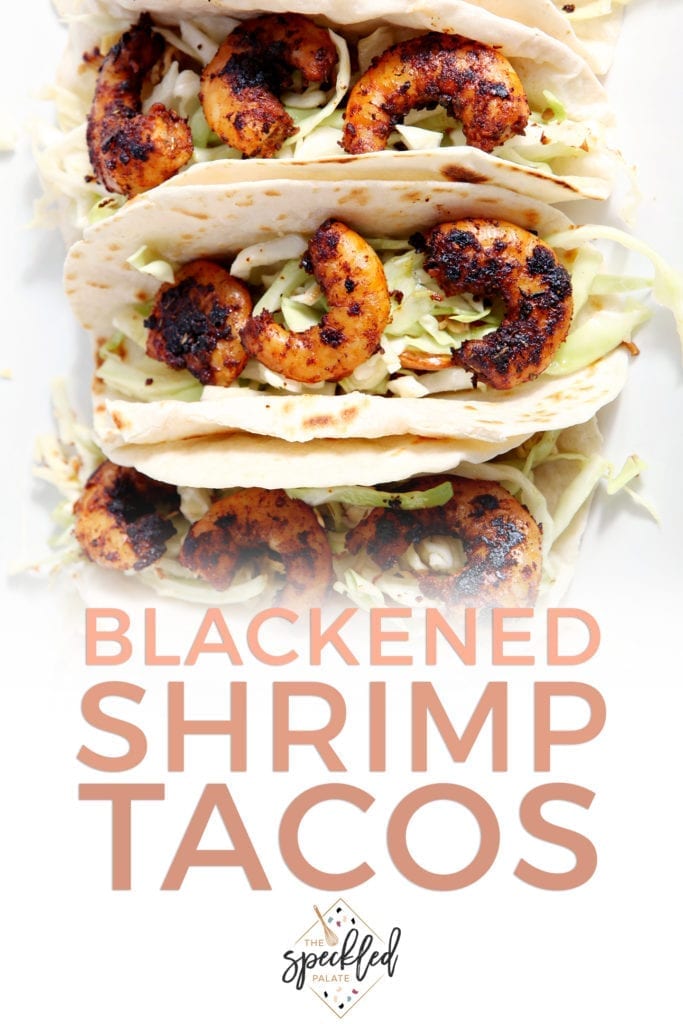 Love all kinds of tacos?

Wanna make these? Scroll on down to learn how you can make Blackened Shrimp Tacos for your next tailgate… or dinner!

Blackened Shrimp Tacos with a crunchy coleslaw are the BEST entree to make at your football tailgate! Shrimp are liberally sprinkled with homemade blackening seasoning, then cooked. Flour (or corn!) tortillas are warmed on the grill. When the elements of the dish are ready, the shrimp are served atop a (made-at-home) Asian-inspired coleslaw that features green cabbage, toasted almonds, toasted Ramen noodles and a honey vinaigrette. These Blackened Shrimp Tacos go great with beer and are easily transported as you peruse your team's tailgate scene!

For this dish to work at a tailgate, prepare the coleslaw at home. Bring in a portable container, and keep in the cooler until time to serve. Also mix up the seasoning mixture for the shrimp at home.

This recipe can easily be doubled or tripled if your tailgate party is hosting more folks.

And now… who’s ready for some tailgating food inspiration?!

In celebration of the upcoming football season, I’ve joined a group of bloggers from all over the country — all of whom are big football fans! — to bring you 64 tailgating recipe ideas for a terrific football party.

Click on their links below to get their recipes and be inspired for your future football-centric get-togethers!