Don’t shy away from making barbecue at home! Instant Pot BBQ Brisket is proof that you don’t need a smoker to make incredible tasting meat this summer. Brine brisket for 24-48 hours before cooking in the electric pressure cooker. When all is said and done, this barbecue brisket tastes amazing… and requires very little hands-on time. Perfect for picnics, patriotic gatherings and more, Instant Pot BBQ Brisket is a flavorful summertime recipe! 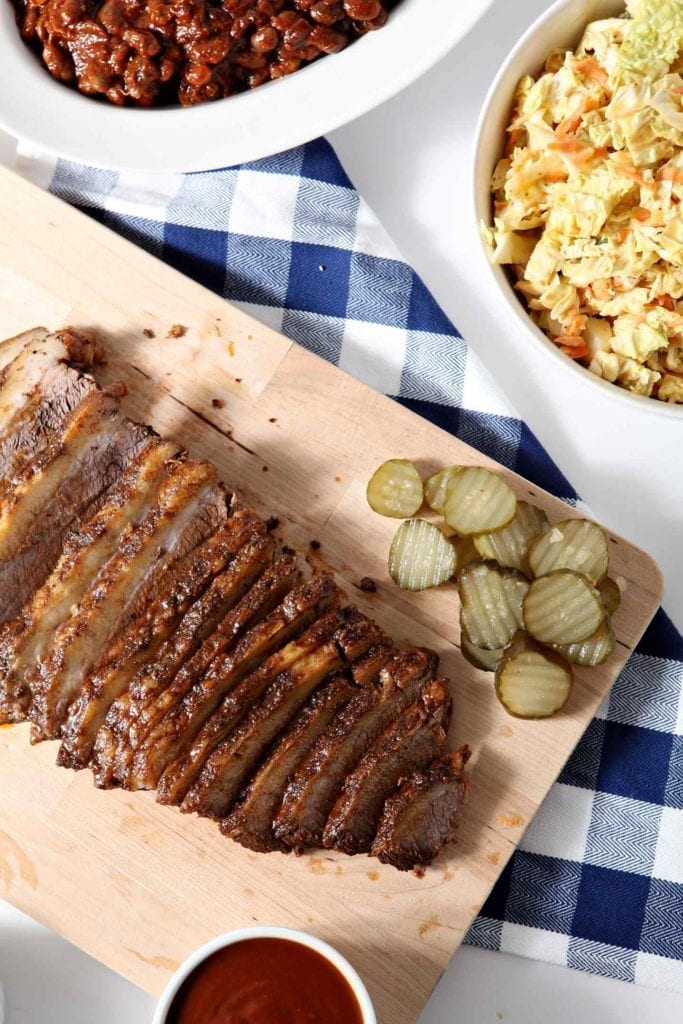 Earlier this year, I was struck by an idea to create a barbecue without a smoker series. I texted a friend about it—someone who has a smoker and cooks barbecue on the regular—and asked if she thought it was sacrilege to tell folks to make barbecue in the slow cooker.

Y’all know what she said? “It’d be kind of hard to describe something as slow cooked meat instead of just calling it barbecue. And anyway, it fits with your brand. Go for it!”

With her encouragement, I took off at a run, and today, we’re tackling an Instant Pot BBQ Brisket. You know, for those of us who want barbecue but don’t want to have to smoke meat for hours upon end and who don’t want to feed 20+ people. 😉 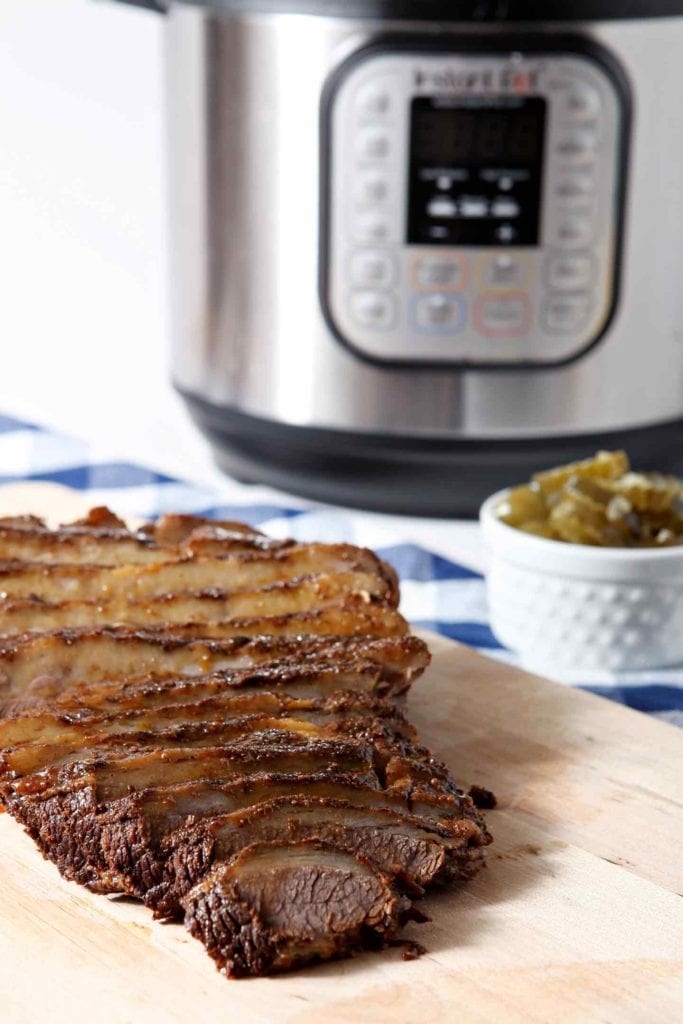 I realize this might be controversial. Goodness knows I have my own Opinions about how certain foods are supposed to be made (hello, 30-minute gumbo, you’re a fraud)… and I know y’all might have similar thoughts about foods that are near and dear to your heart.

I realize I might upset some of y’all with this recipe because it’s not traditional. I get it.

But for those of you who aren’t upset? Well, you’re in for a treat because this barbecue brisket is out-of-this world DELICIOUS. And chances are, you have all the tools you’ll need at home to make this for a family dinner or a summertime gathering! 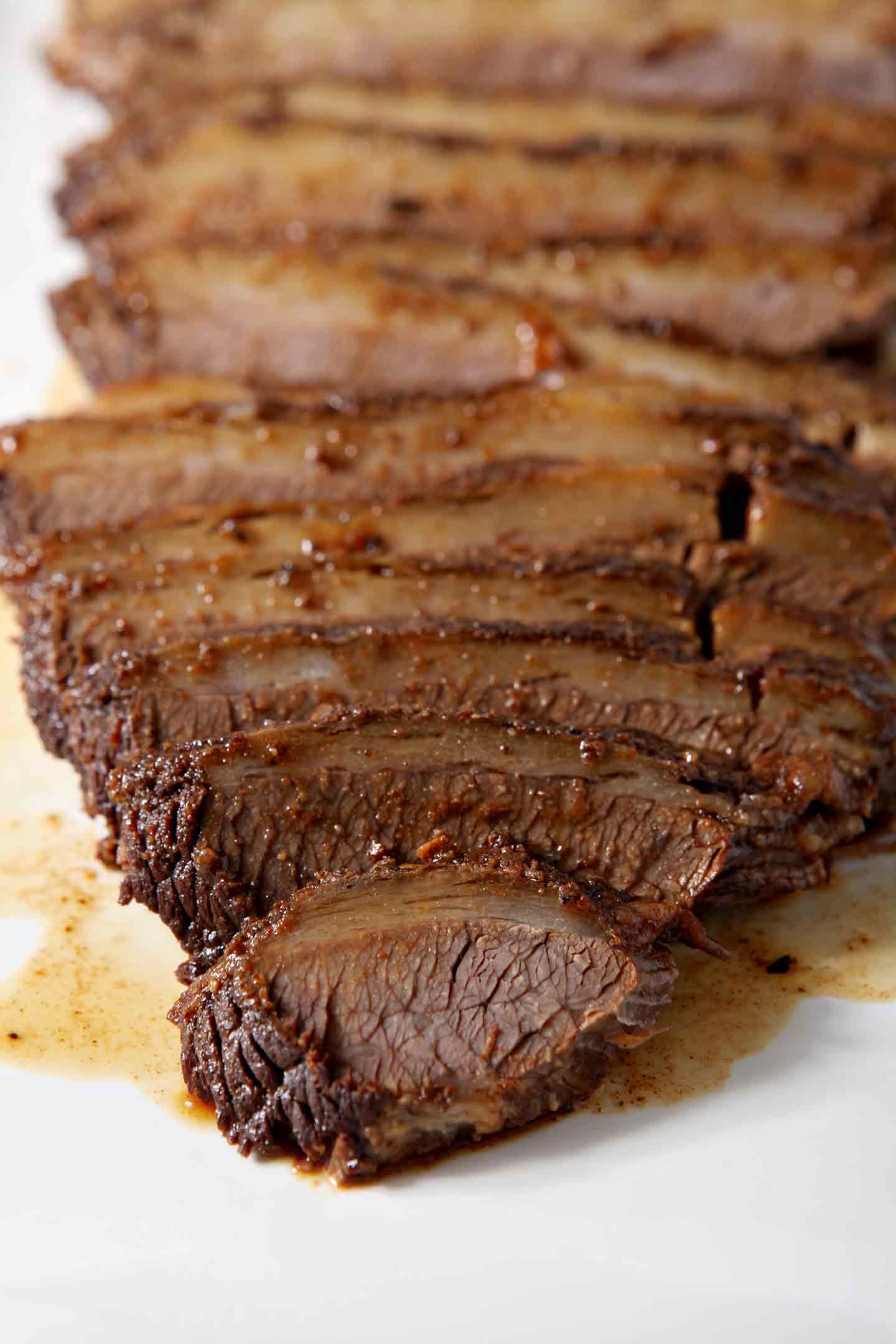 First and foremost, let’s get in to some specifics and some questions you might have about this Barbecue Brisket recipe—and brisket, in general.

What is barbecue beef brisket?

Brisket is a flavorful cut of meat from a cow’s shoulder. It’s tougher, which means it requires longer cook times, and is oftentimes used to make barbecue, corned beef and pastrami.

Barbecue beef brisket is the way a brisket is cooked. Down here in Texas, cow is king when it comes to all things barbecue. A good brisket is a calling card for BBQ restaurants, and people will come from near and far to try their smoked creations! 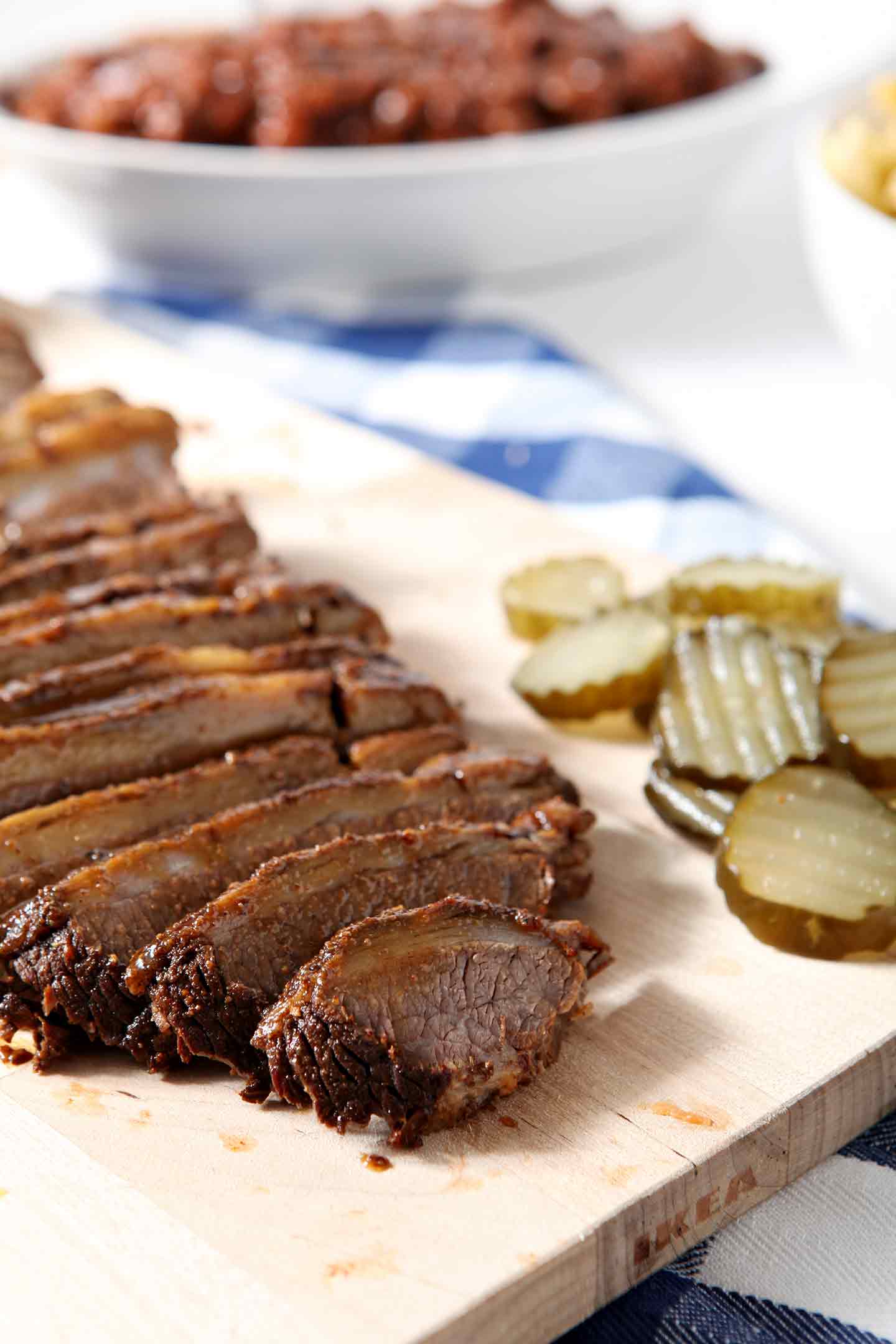 Where can I find brisket at the grocery store?

Ask your butcher! (Make sure you’re going to a grocery or a specialty meat store that has someone who knows his/her stuff.) They’ll know where the brisket is—and if they have any cuts of it—as well as be able to trim it down for you if you don’t want to buy a ginormous one.

It should be noted that for the testing of this recipe, I purchased a 10 lb. brisket and broke it down into smaller pieces to make a more family-friendly sized brisket. You can do this, too, and vacuum seal the other pieces of meat if you don’t want to cook 10+ pounds of beef in one setting. 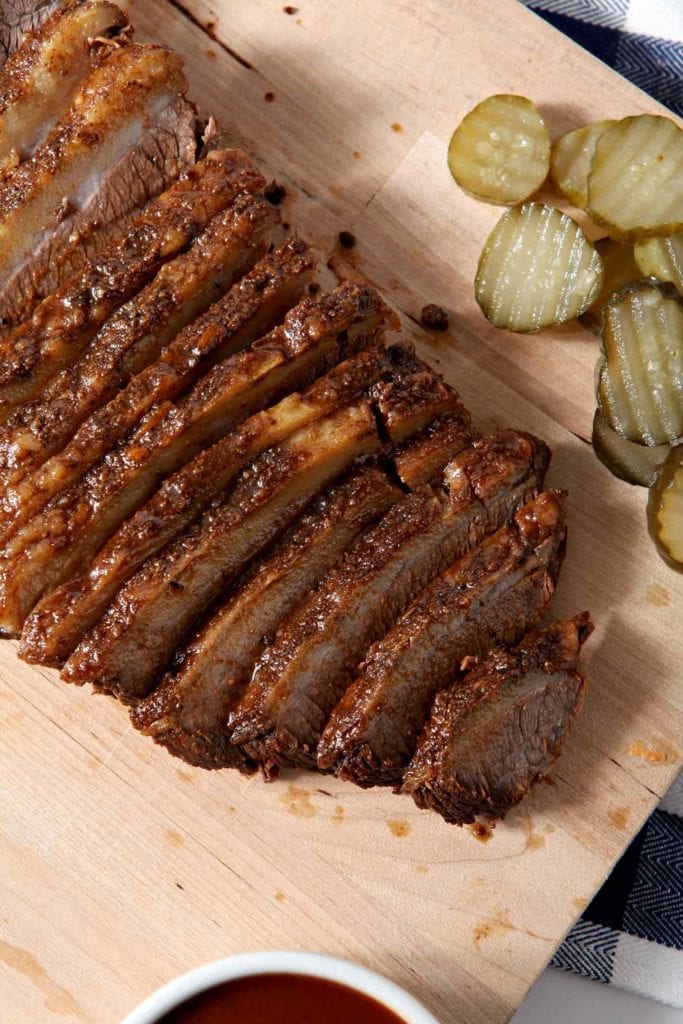 Why do we brine this BBQ brisket recipe? Can I skip this step?

Normally, you’d brine a lean meat, like a turkey or a chicken to seal in moisture and give the meat an added boost of flavor. Brisket isn’t necessarily lean—heck, it has a nice fat slab on top! But we’re brining this brisket because it’s going to cook quickly… and we want to keep as much moisture in it as possible!

While you don’t necessarily have to brine a brisket before you cook it, I advise following this step and taking the time because I found the resulting brisket(s) much more flavorful.

If you want to learn more about brining and the process, I highly suggest reading this informative guide from Fine Cooking. 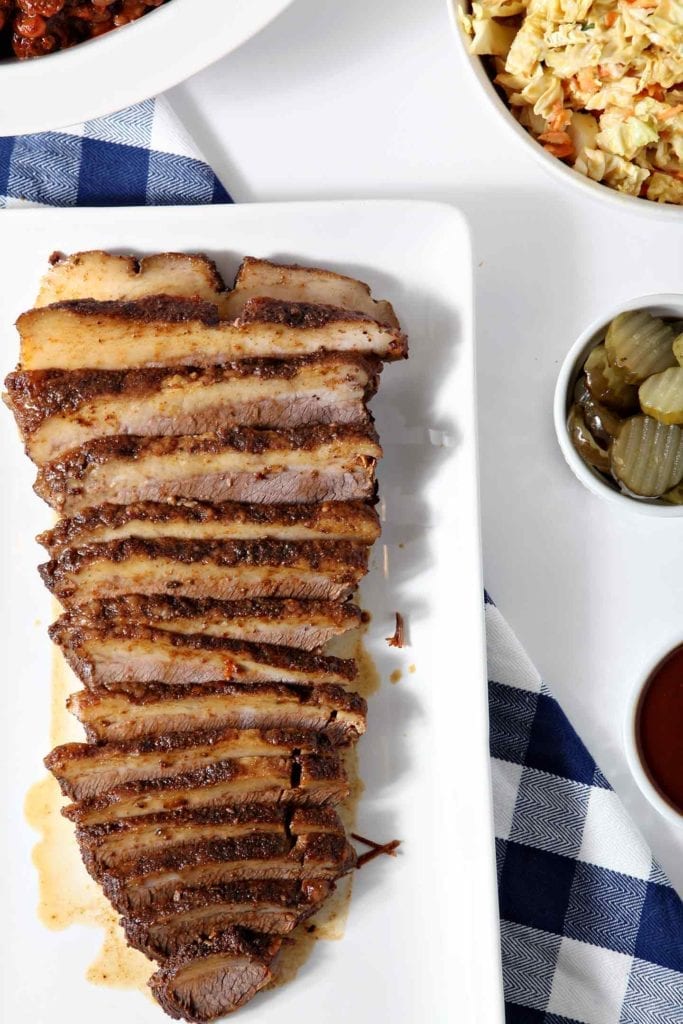 How long, per pound, will my brisket take to cook in the Instant Pot?

I did a lot of experimenting with this, y’all. It should take around 24 minutes per pound for the brisket to cook (and get all nice and tender) in the Instant Pot.

I don’t have an electric pressure cooker. Can I make this recipe in a slow cooker instead?

I’ve made several barbecue dishes in the slow cooker before (like several renditions of pulled pork, chicken, etc.), but I’ve never tried this recipe in it. That said, I think it could work and hope to be able to test it out for y’all this summer so we can have a definitive answer.

You’d need to look up the cooking time (based on weight) in your slow cooker guidebook and follow that. 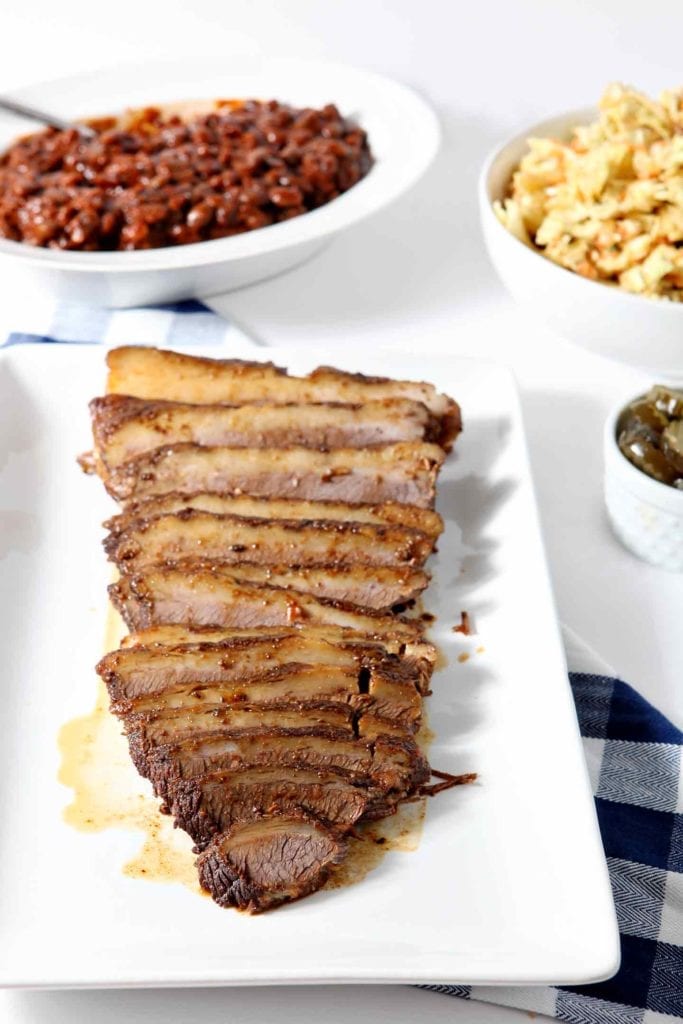 Y’all ready to check out this divine way to make BBQ Brisket this summer? Scroll on down to learn how easy it is!

Don't shy away from making barbecue at home! Instant Pot BBQ Brisket is proof that you don't need a smoker to make incredible tasting meat this summer. Brine brisket for 24-48 hours before cooking in the electric pressure cooker. When all is said and done, this barbecue brisket tastes amazing... and requires very little hands-on time. Perfect for picnics, patriotic gatherings and more, Instant Pot BBQ Brisket is a flavorful summertime recipe!

What if my brisket is a different size than yours?
It should take around 24 minutes per pound for the brisket to cook (and get all nice and tender) in the Instant Pot.

Do you have Opinions about certain food and how it should be made? What’s one food that you have strong feelings about?

Could I interest you in Instant Pot BBQ Brisket this weekend? 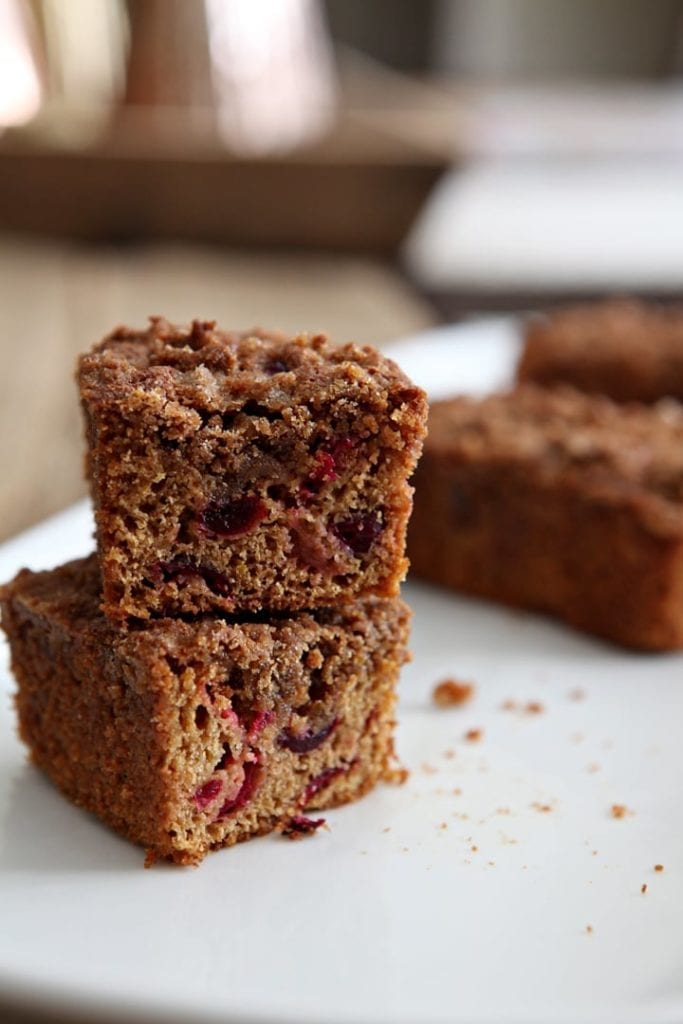 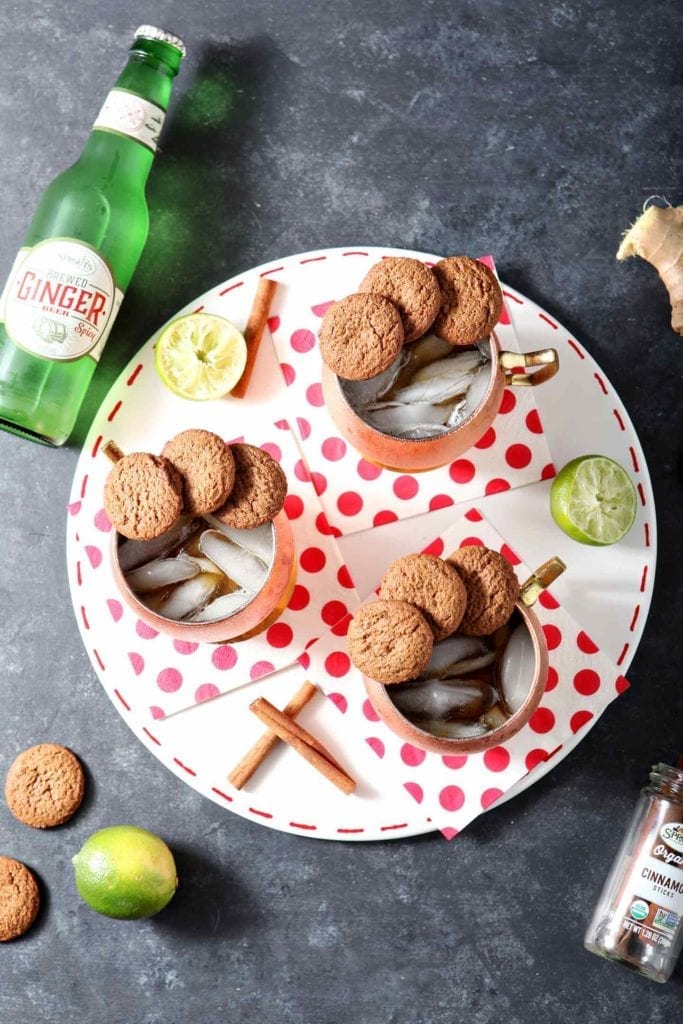