This shop has been compensated by Collective Bias, Inc. and its advertiser. All opinions are mine alone. #GiveThanksBeFull #CollectiveBias 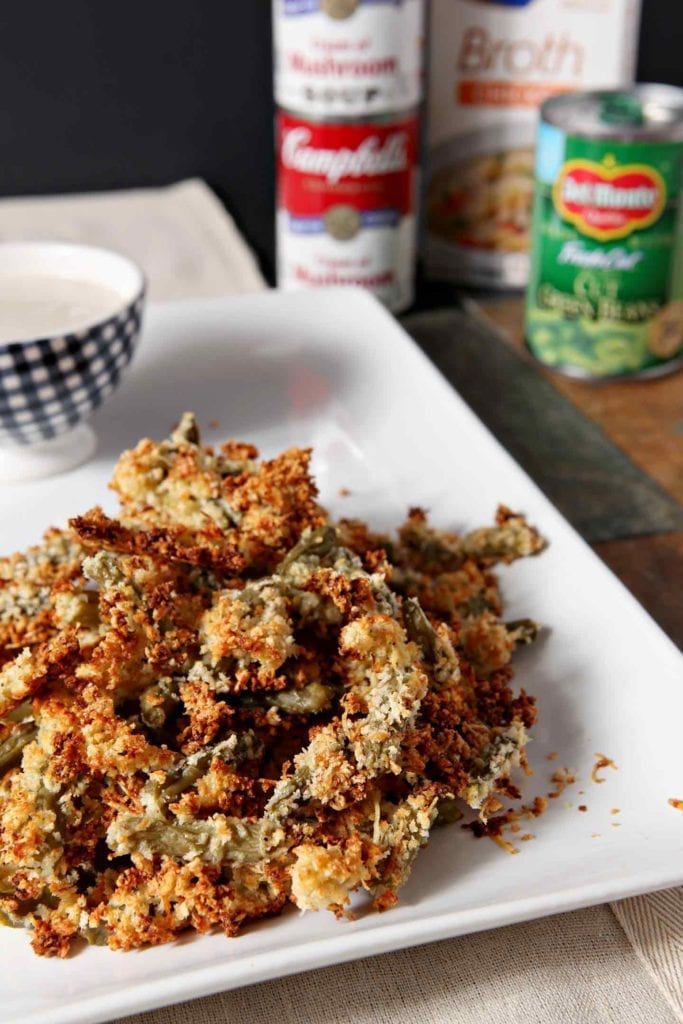 ‘Tis the season for FRIENDSGIVING!

And I don’t know about y’all, but I’m always lookin’ for some quick, delicious dishes to share with my friends.

So if you’re one of those people? And you’re hosting and/or attending a Friendsgiving celebration? Have I got the recipe for you! Green Bean Casserole is a classic recipe for Thanksgiving… so how ‘bout we take that classic and turn it on its head?

I’ve got the perfect EASY appetizer to make for a crowd that’s prepped, cooked and on the table in less than 50 minutes. There’s a restaurant in Dallas that serves fried green beans, and I’d be lying if I said those weren’t an inspiration for this recipe.

The thing is… I hate frying in my own home. Every time I’ve done it in recent memory, my house has smelled like oil and whatever food I cooked in said oil for days.

So today? We’re cooking these faux-fried green beans in the oven to make ‘em a little lighter.

We’re also making a delightfully easy “gravy” to dip them in.

And it’s so, so, so good. Between my husband, my daughter and I, we ate half the batch after they came out of the oven, dunking the Crunchy Green Bean Casserole Bites into the Mushroom Gravy I whipped up to go along with them. 😉 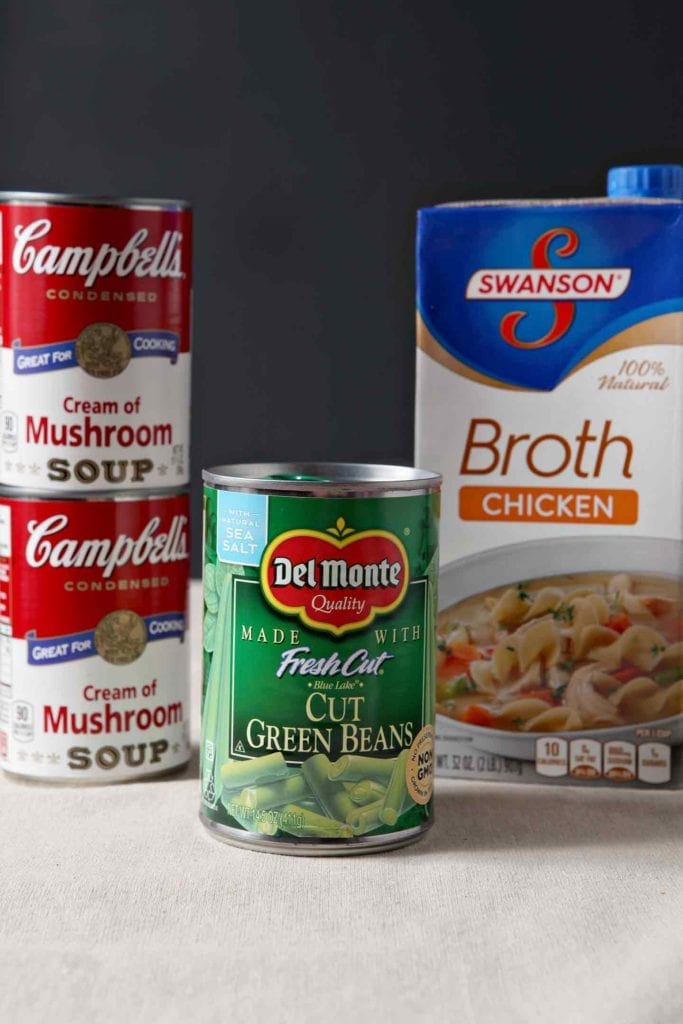 I headed on down to Target to pick up ingredients to use for this spin on the traditional green bean casserole.

First, I picked up some Campbell’s® Cream of Mushroom Soup, which I planned to use to make a simple “gravy” for this dish. (I found this by the entrance of the store in the grocery section with tons of other Thanksgiving-centric foods. It’s also down the soup aisle!) Campbell’s soup has been a part of my life for as long as I can remember, and the easy-to-make soups not only provide an awesome base for many dishes, but they can be eaten as a meal by themselves and nourish the entire family.

I also grabbed a carton of Swanson® Chicken broth. (I found this by the entrance of the store in the grocery section, too! It’s next to the soup on the soup aisle, as well.) This 100% natural broth is made from simple ingredients. As an added bonus, there are NO added artificial flavors or preservatives.

Then I picked up the pièce de résistance: the Del Monte® Blue Lake® Cut Green Beans. (They were also proudly displayed by the entrance of Target’s grocery section with the other Thanksgiving-centric food, but I spotted some cans down the canned veggie aisle, too.) These high quality green beans are canned simply with water and a dash of sea salt. I’ve relied on cans of Del Monte® green beans many, many times to add a quick, nutritious veggie to our dinner, and my whole family loves them.

After grabbing those essential parts of this appetizer, I picked up some eggs in the dairy section, parmesan by the cheese, and panko breadcrumbs down the baking aisle.

Quite honestly, Target has all the goods to make your Friendsgiving (or Thanksgiving!) super tasty… and they’ve made it easy on us with these displays by the grocery entrance for this twist on green bean casserole. It makes for a quick, easy shopping stop with no fuss.

So I had my ingredients. Now it was time to make the appetizer!

If the breading doesn’t stick to the green beans well, you can coat them as best as possible, then sprinkle the leftover breading on top of the beans before they bake. It might not be super pretty, but food doesn’t have to be super pretty to be utterly delicious. 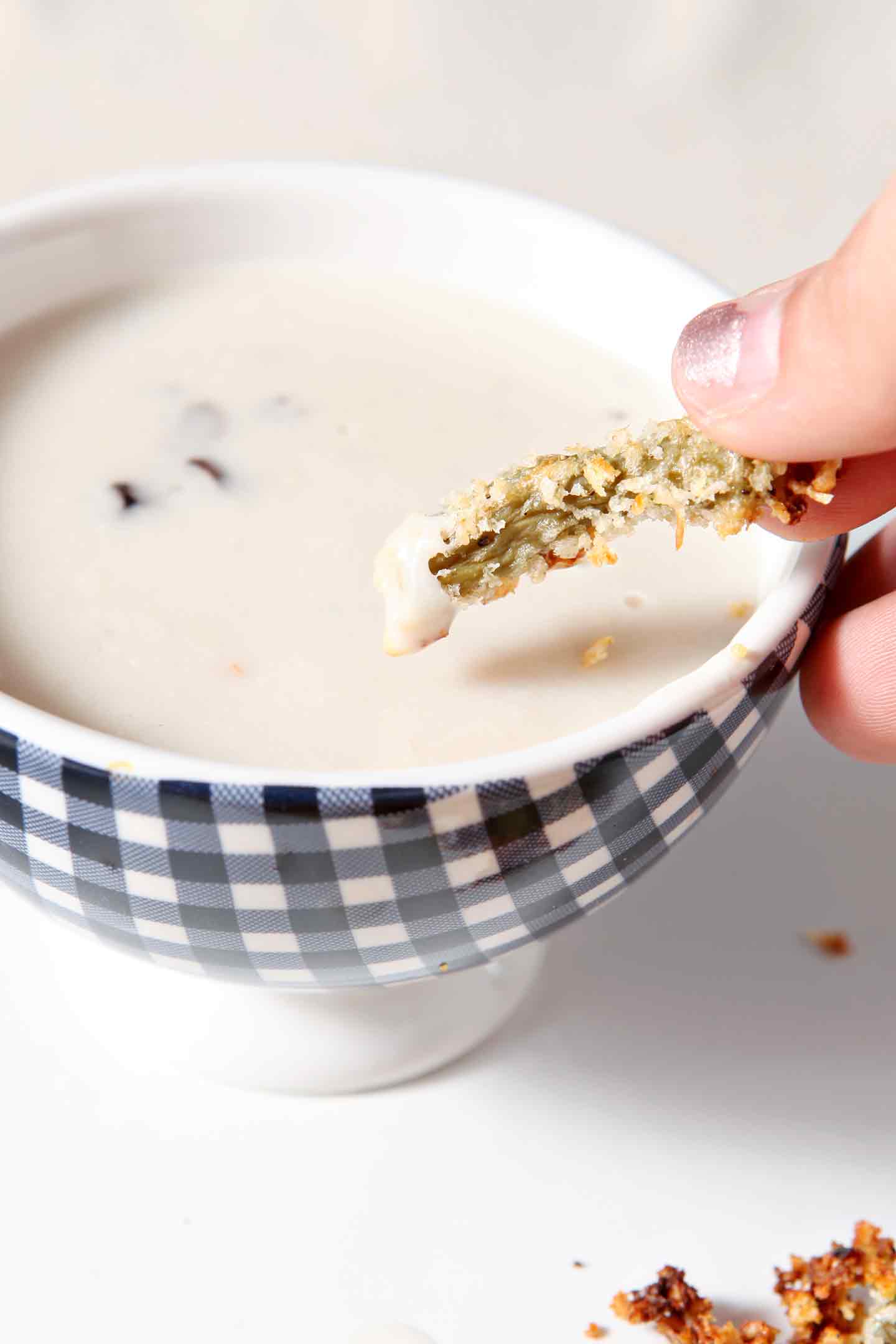 Want to make the ULTIMATE Friendsgiving appetizer? Crunchy Green Bean Casserole Bites with Mushroom “Gravy” is the recipe you've been looking for! Transform traditional green bean casserole ingredients - Del Monte® Blue Lake® Cut Green Beans, Campbell's® Cream of Mushroom Soup and Swanson® Chicken broth - into a handheld appetizer and dipping "gravy" that are sure to wow. Ready in less than 50 minutes, these easy-to-make bites are scrumptious!

Get recipe inspiration from Swanson, too!

What do you plan to cook for a Friendsgiving/Thanksgiving appetizer?