This post is sponsored by Le Creuset and Pampelonne. As always, all opinions and recipe are my own. Thanks for supporting the brands that support The Speckled Palate!

Sweeten up any holiday morning gathering by serving dairy-free Cranberry Cinnamon Rolls! The dough of buns is speckled with fresh cranberries, and the gooey cranberry-maple filling adds the right amount of sweetness to this brunch piece de resistance! Topped with a sweet-and-tart Blood Orange Icing, Cranberry Cinnamon Rolls are a festive, one of a kind recipe for Thanksgiving Brunch, Christmas breakfast or any morning that needs pizzazz. 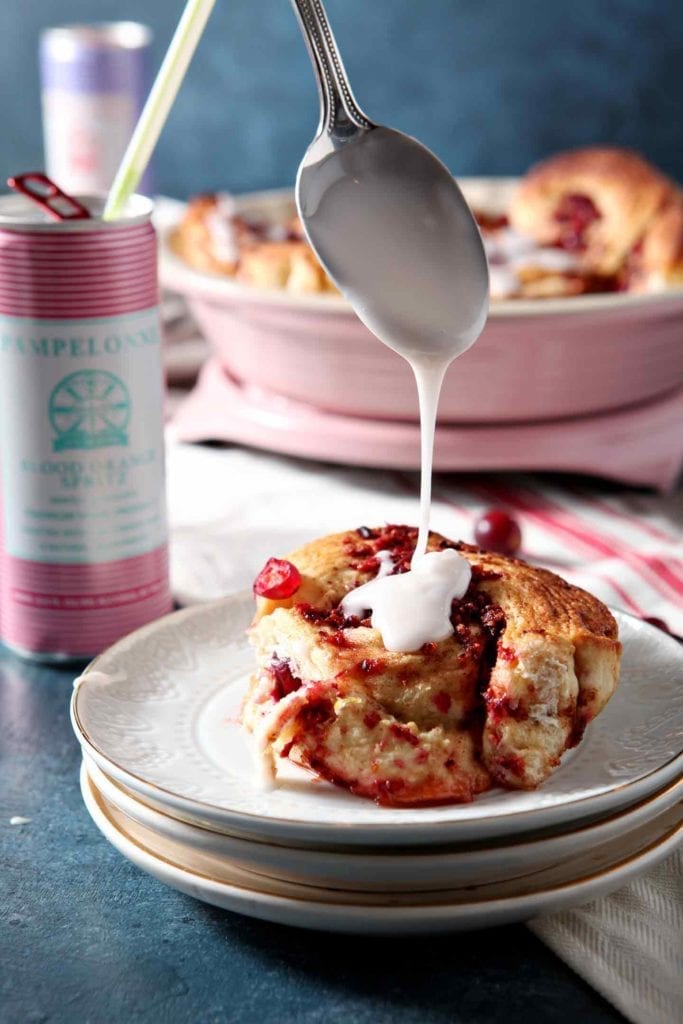 When I was a kid, my basketball team always practiced on Friday nights.

After practice most Friday nights, we’d have an impromptu sleepover with friends, hitting up our favorite frozen yogurt place that was right next to the video store on the way home. Movie and yogurt in hand, we’d head home and stay up half the night, chatting about everything under the sun after the movie was long done.

The next morning, my parents would bake Orange Cinnamon Rolls for our motley crew of girls. 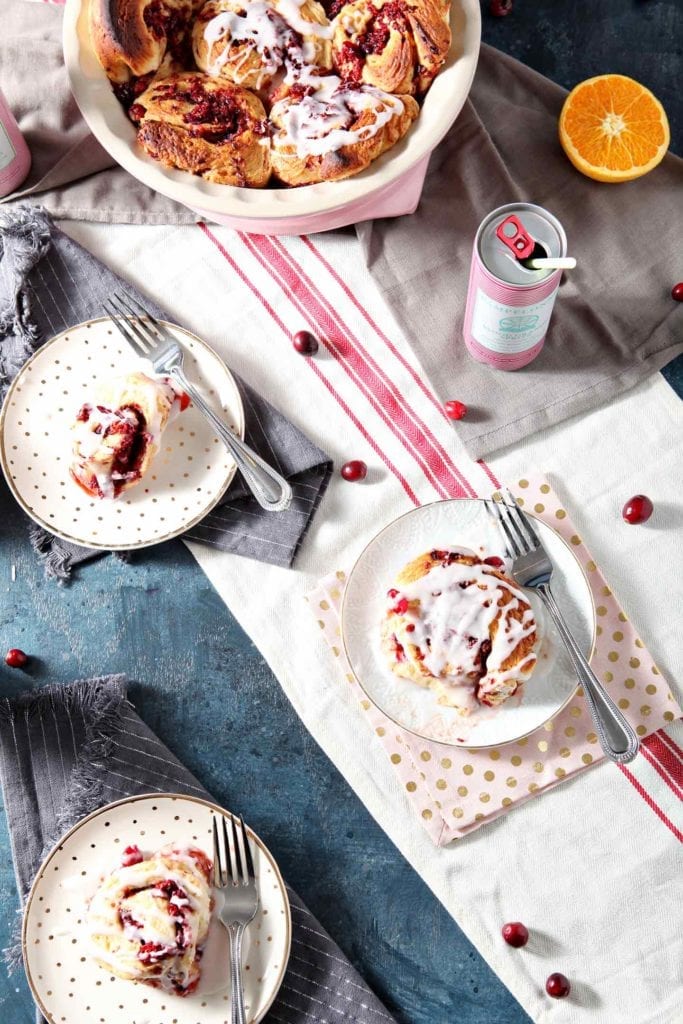 Y’all remember those ones, right? They cane in tube that always popped at the wrong moment and scared everyone in the near vicinity, no matter how prepared they were for the noise.

Those Orange Cinnamon Rolls were a part of our Saturday routine for what felt like years. And while my sister and I enjoyed them for a long while, I can’t think about them anymore without my stomach turning a bit.

Quite honestly, they’re kind of like my childhood overindulgence on brownies, which led to me boycotting brownies for entirely too long. 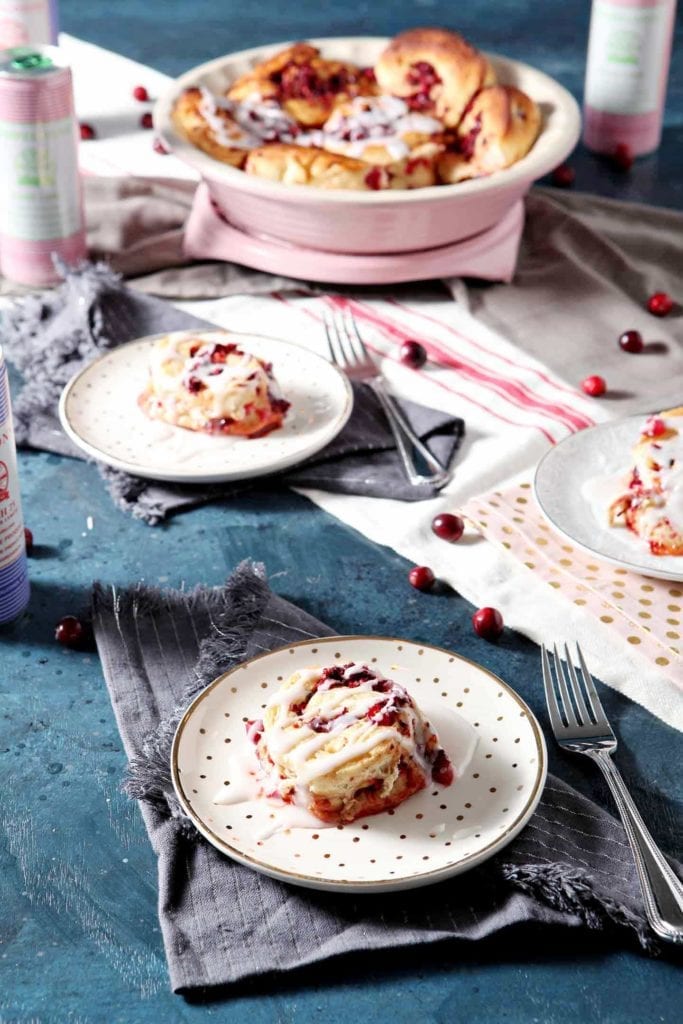 Those rolls were really orange-y—in an artificial kind of way—and overwhelmingly sweet.

And as a kid, obviously, that was my jam.

But as an adult, I’ve learned that I can only take so much sweetness, especially when it comes to breakfast or brunch.

So today, I’m teaming up with my friends at Le Creuset and Pampelonne to bring y’all Sugar Pink Boozy Brunch with some naturally sweet and utterly indulgent CRANBERRY CINNAMON ROLLS!

The idea behind this brunch is two-fold.

Le Creuset just released their gorgeous Sugar Pink Matte Collection. (Umm, hi, I’d like one of each!) And Pampelonne, the makers of natural, bright and balanced canned wine cocktails that come in the cutest packaging, have three tasty flavors to up the ante for ANY brunch tablescape!

In these photos, you’ll spot the Le Creuset Heritage Pie Dish and Deluxe Round Trivet in the Sugar Pink Matte, as well as the whole Pampelonne collection! 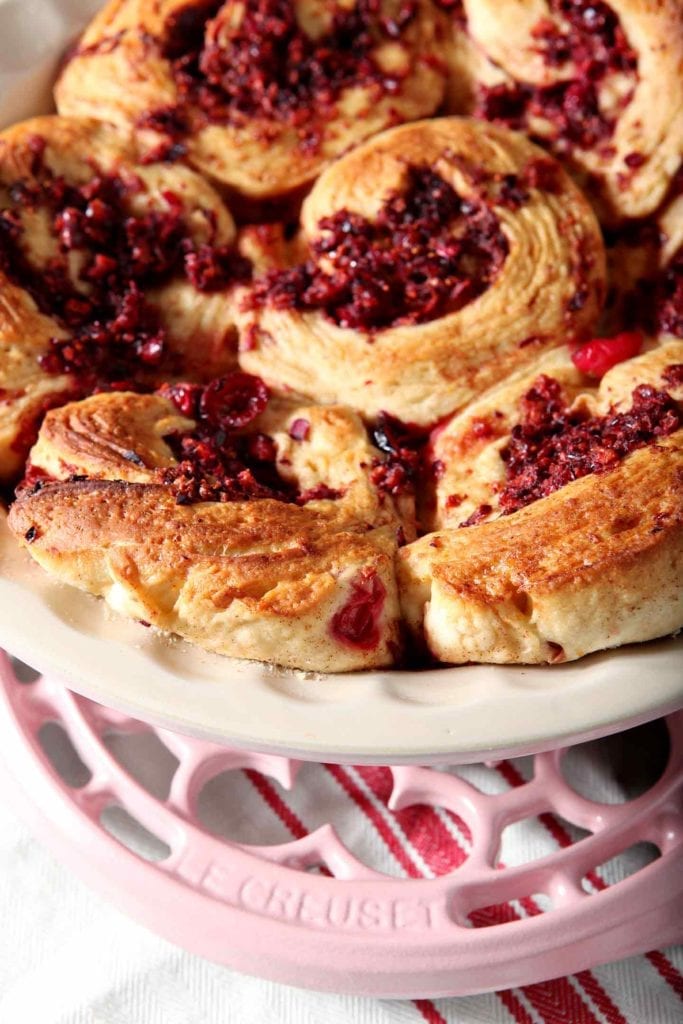 So. Let’s talk about these gorgeous Cranberry Cinnamon Rolls.

They’re sweet—naturally so—and tart, thanks to the large amount of cranberries used in the dough and filling. There’s a little bit of orange-y goodness in them, too, but when combined with the cranberries, it’s not overwhelming.

Not only are the cinnamon rolls sticky and slightly sweet, but when drizzled with the Blood Orange Frosting—which features Pampelonne Blood Orange Spritz—everything comes together.

And they add such a nice sweet twist to our Thanksgiving brunch! 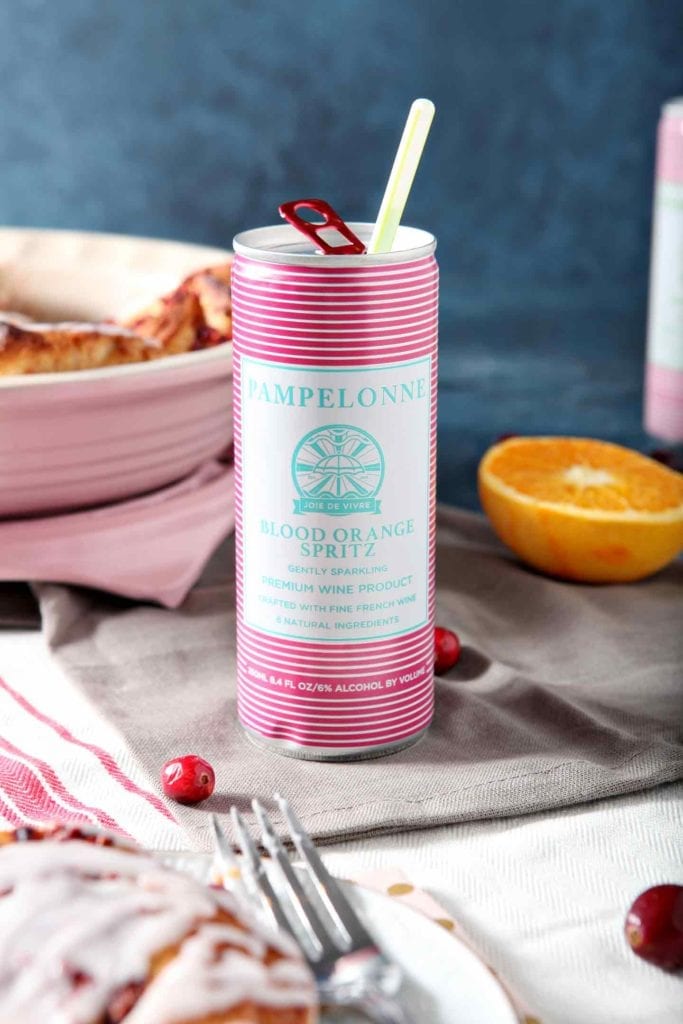 If you’re not a cranberry lover, this recipe probably isn’t for you because it tastes like cranberries (and cinnamon roll, obvs. But very cranberry-y.)

If you’re not, I highly suggest checking out my Strawberry Cinnamon Breakfast Buns or Walnut Sticky Buns.

But if you are, I have a feeling you’re gonna adore this combination because it sings of holiday flavors. Scroll on down to check out the recipe!

I think these cinnamon rolls will make you incredibly happy all season long!

Sweeten up any holiday morning gathering by serving dairy-free Cranberry Cinnamon Rolls! The dough of buns is speckled with fresh cranberries, and the gooey cranberry-maple filling adds the right amount of sweetness to this brunch piece de resistance! Topped with a sweet-and-tart Blood Orange Icing, Cranberry Cinnamon Rolls are a festive, one of a kind recipe for Thanksgiving Brunch, Christmas breakfast or any morning that needs pizzazz.

If you make these the night before, put them in the refrigerator in the baking dishes BEFORE the second rise. The morning of, be sure to pull them out of the fridge in time to do their second rise. This will take a little longer, as they'll be cold, so allot about an hour and a half for them to sit out and rise, then bake as directed.

Do you remember those Orange Cinnamon Rolls, too?

Do you think you’d dig these Cranberry Cinnamon Rolls?