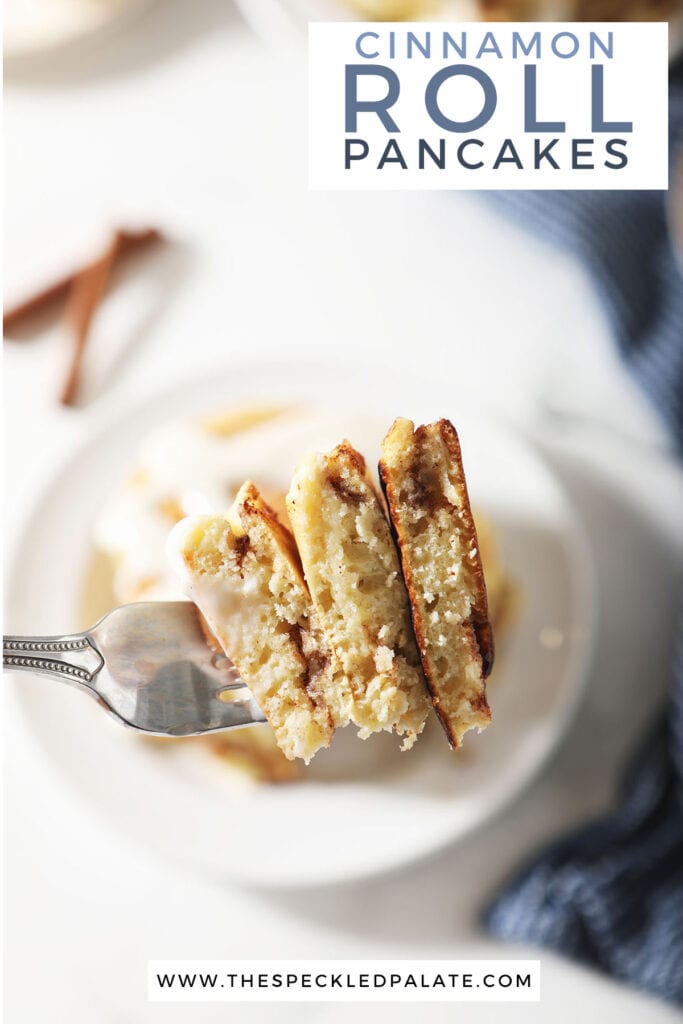 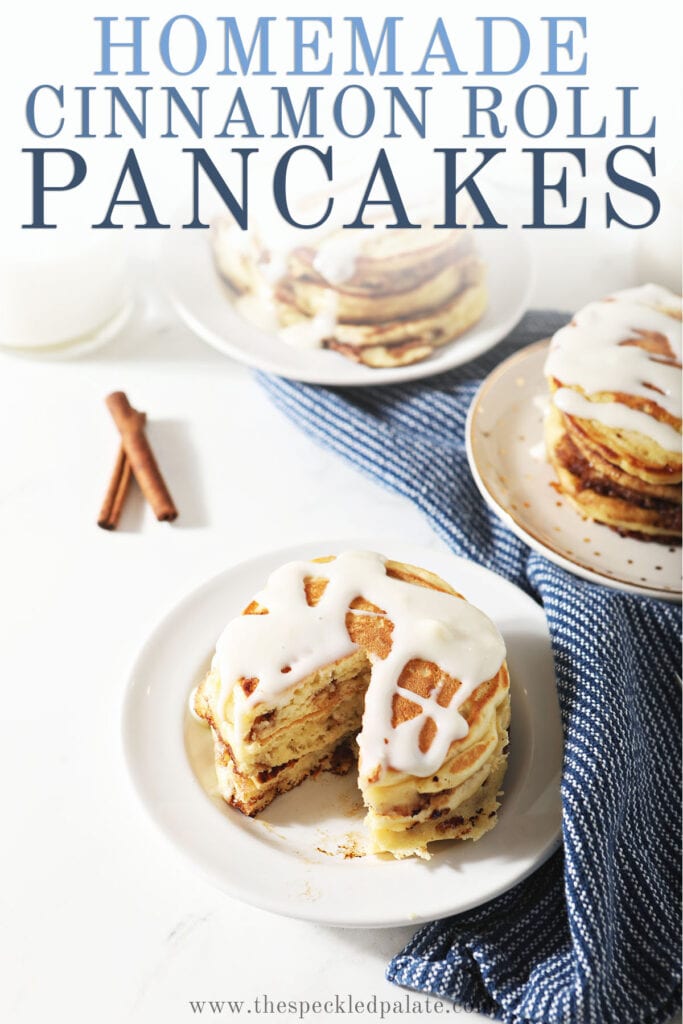 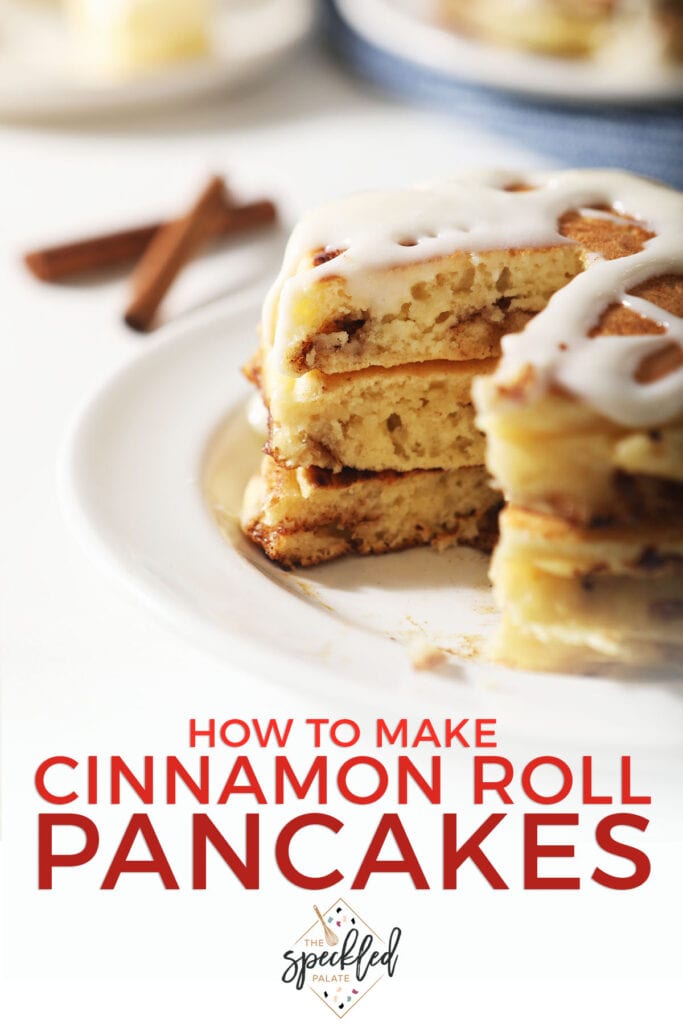 This Cinnamon Roll Pancake recipe first appeared on Savory Experiments, where I am a contributor.

Make breakfast an experience with Cinnamon Roll Pancakes! A twist on the brunch classic, these homemade pancakes feature cinnamon-sugar swirls and are topped with a cream cheese glaze. Perfect for weekends, holidays or even breakfast for dinner. Makes 12 pancakes.

Love homemade pancakes? You need to check out How to make the Best Homemade Pancakes!

I’ve said it before and I’ll say it again—we are pancake people, and my entire family is here for fun twists on classic homemade pancakes.

These Cinnamon Roll Pancakes take the traditional breakfast item and elevates them to something that’s manageable for a person to make in a single morning.

While these homemade pancakes can get a bit messy, they’re worth the effort because they are utterly scrumptious.

Unlike a classic cinnamon roll, these beautiful pancakes have the same flavor profile, thanks to a fun swirl of cinnamon-sugar. As an added bonus, they also don’t take hours of preparation to make.

These homemade pancakes are topped with a tart cream cheese glaze because that’s what you do with a cinnamon roll.

The cinnamon-sugar swirl can make these pancakes a little tricky, but I promise the taste is worth the potential mess. I’m sharing my best tips and tricks below for them to be less of a mess—but I want you to be prepared because stickiness is something you’re going to deal with.

Need breakfast recipe inspiration? Head on over to my Breakfast and Brunch Recipe Index.

What you need to make Cinnamon Roll Pancakes

Homemade pancakes are made from a handful of ingredients you probably already have in your pantry and refrigerator. You’ll need…

For that, you’ll need:

The beauty in this one is that you can make it in your blender or your food processor. Also, you can make it the day before so you don’t have to fret with it the morning you’re making your pancakes.

How to make this Cinnamon Roll Pancake recipe

Prep the cinnamon-sugar swirl and the glaze

Make the cinnamon-sugar swirl. Combine melted butter with brown sugar and cinnamon in a bowl, mixing until combined. Transfer this to a piping bag or a plastic bag (we’ll snip off the end in a bit!), and let it sit while you make the pancakes! Honestly, letting it sit for upwards of 20-30 minutes is best.

Make the cream cheese glaze by combining softened cream cheese, powdered sugar, milk and vanilla extract in the base of your food processor or blender, and blend until smooth. Voila! That’s it! Set it aside for later.

In a large bowl, combine the flour, sugar, baking powder, baking soda and salt. Whisk together until combined.

After that, measure the milk, eggs, vanilla extract, and oil into a smaller bowl. Using a fork, stir together until combined. Make sure the egg yolk and white are mixed well because you don’t want stray pieces of egg white in your pancakes.

Pour the wet ingredients into the dry ingredients. Use a rubber spatula to gently fold them together until just combined. The batter doesn’t need to be smooth, and be careful not to overmix.

Once the batter has been mixed, heat a nonstick skillet or a griddle over medium heat. Brush the pan with melted butter or unflavored cooking spray, and let it warm up.

Use a cookie scoop or a measuring cup to dollop the pancakes onto the preheated skillet when ready. Snip the end off your baggie holding the cinnamon-sugar mixture, and swirl it on top of the pancakes. Top with another scoop of pancake batter to cover the swirl (and keep the cinnamon-sugar inside your pancake.)

Switch it up! Leave the cinnamon swirl visible for the true “cinnamon roll” look by not adding the extra scoop of batter. It will be messy, but it’s a fun look!

When several bubbles form on the surface, flip the pancakes, and cook through for another 1-2 minutes.

Some of the cinnamon-sugar mixture will run out, especially if it’s close to the edge of the pancakes. That’s OK—because the majority of it should stay inside the pancake! Be prepared for this to create stickiness on the pan.

Wipe down the pan with a wet paper towel or cloth between rounds to remove the cinnamon-sugar stickiness (because it’ll burn and also make your pan sticky), then brush the griddle with additional butter or oil.

Repeat until all of the batter has been made into pancakes.

Stack the cooked pancakes onto plates. Serve with the cream cheese glaze and a sprinkle of powdered sugar, and enjoy immediately.

While pancakes are something that I previously thought might be a fussier item to prepare for a brunch at home situation, you can absolutely make them for brunch! It just requires a little patience, planning and working ahead to get ‘em made before guests arrive.

Here are a few tips and tricks to transforming these pancakes into a brunch centerpiece:

When do you know how to flip your pancakes?

When big ‘ol bubbles start to form in the batter. Lift up the edge a little bit with a spatula to confirm the color on the other side before committing… because when you flip them, you won’t flip them again. (Yep. We only need to flip our pancakes once.)

How do I prevent these pancakes from sticking to the griddle?

These Cinnamon Roll Pancakes can be a bit of a mess with the cinnamon-sugar mixture swirled into them, so my way to prevent the stickiness is brushing the griddle with butter between each round of pancakes. Also, if you’re able to drizzle extra pancake batter on top of the swirls, this will contain the cinnamon-sugar mixture a bit better and will allow for a cinnamon roll surprise when the pancakes are cut into!

How do I store leftover Cinnamon Roll Pancakes?

Line a baking sheet with wax paper, and pop them in the freezer for 4-6 hours. When the pancakes are fully frozen, transfer them to a freezer baggie. Reheat in the toaster oven, toaster or the oven until warm.

Quick Tips and Tricks for the Best Pancakes

Ready to make this Cinnamon Roll Pancake recipe? Here’s how you can do it at home…

Make breakfast an experience with Cinnamon Roll Pancakes! A twist on the brunch classic, these homemade pancakes feature cinnamon-sugar swirls and are topped with a cream cheese glaze. Perfect for weekends, holidays or even breakfast for dinner.

This recipe makes 12 (2 tablespoon) pancakes. If you use a larger or smaller scoop, you will have fewer or more pancakes.

Here are a few tips to making the best pancakes at home: 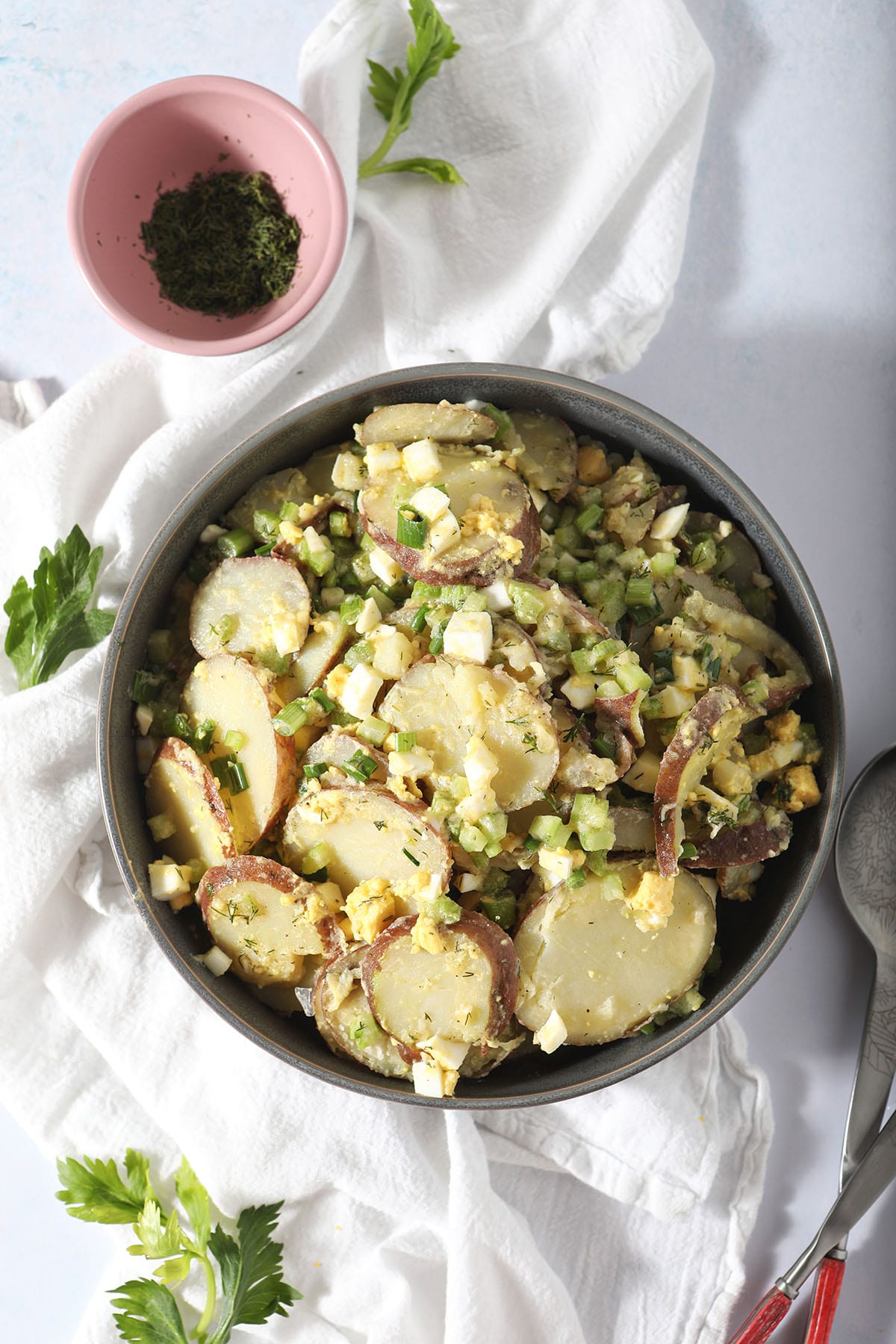 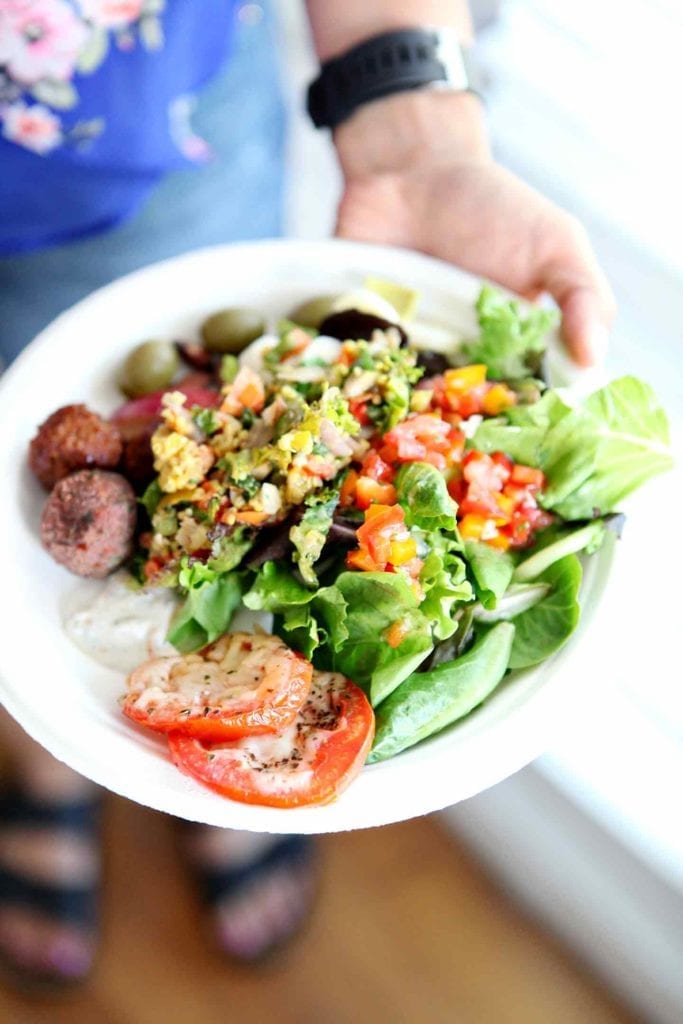 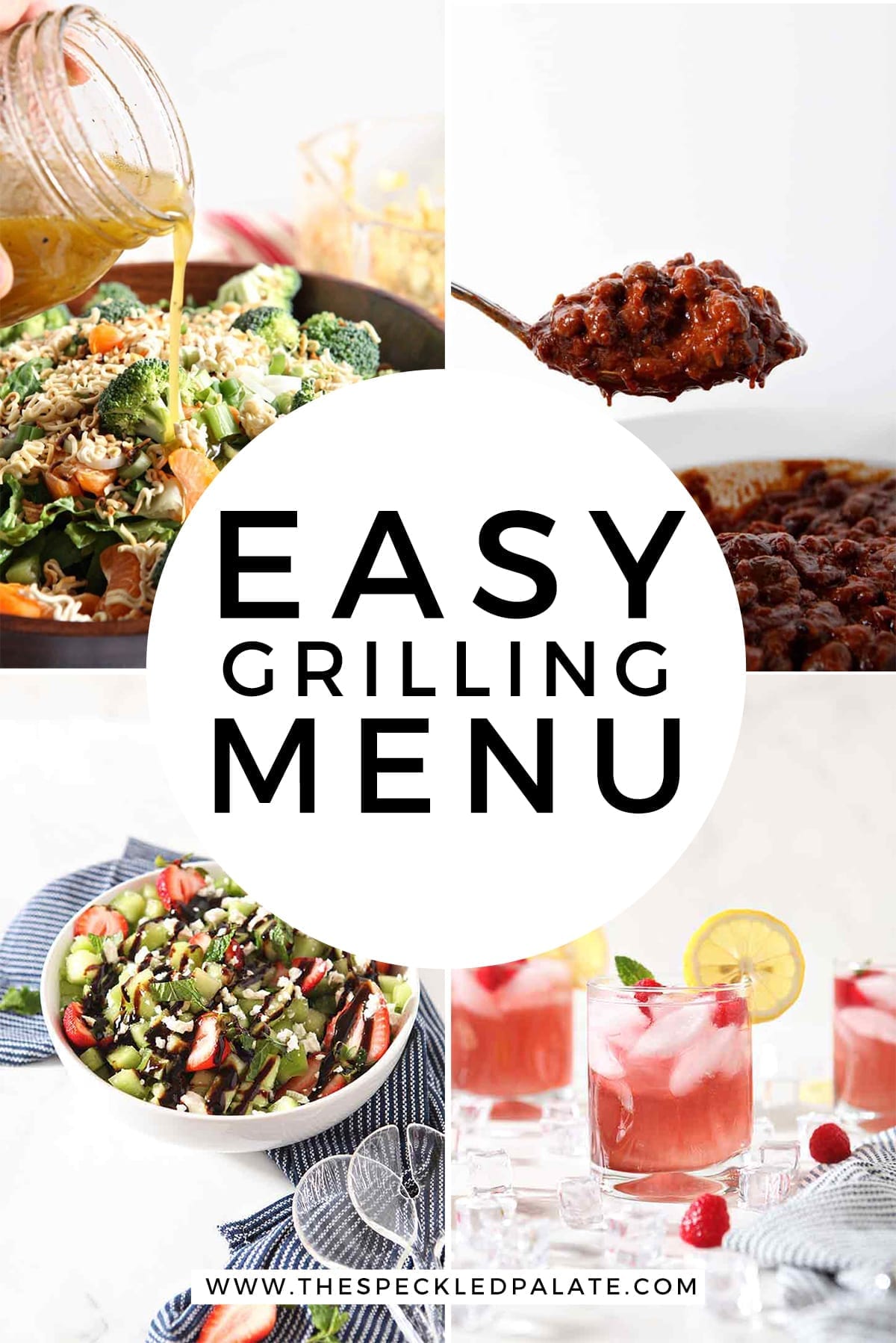 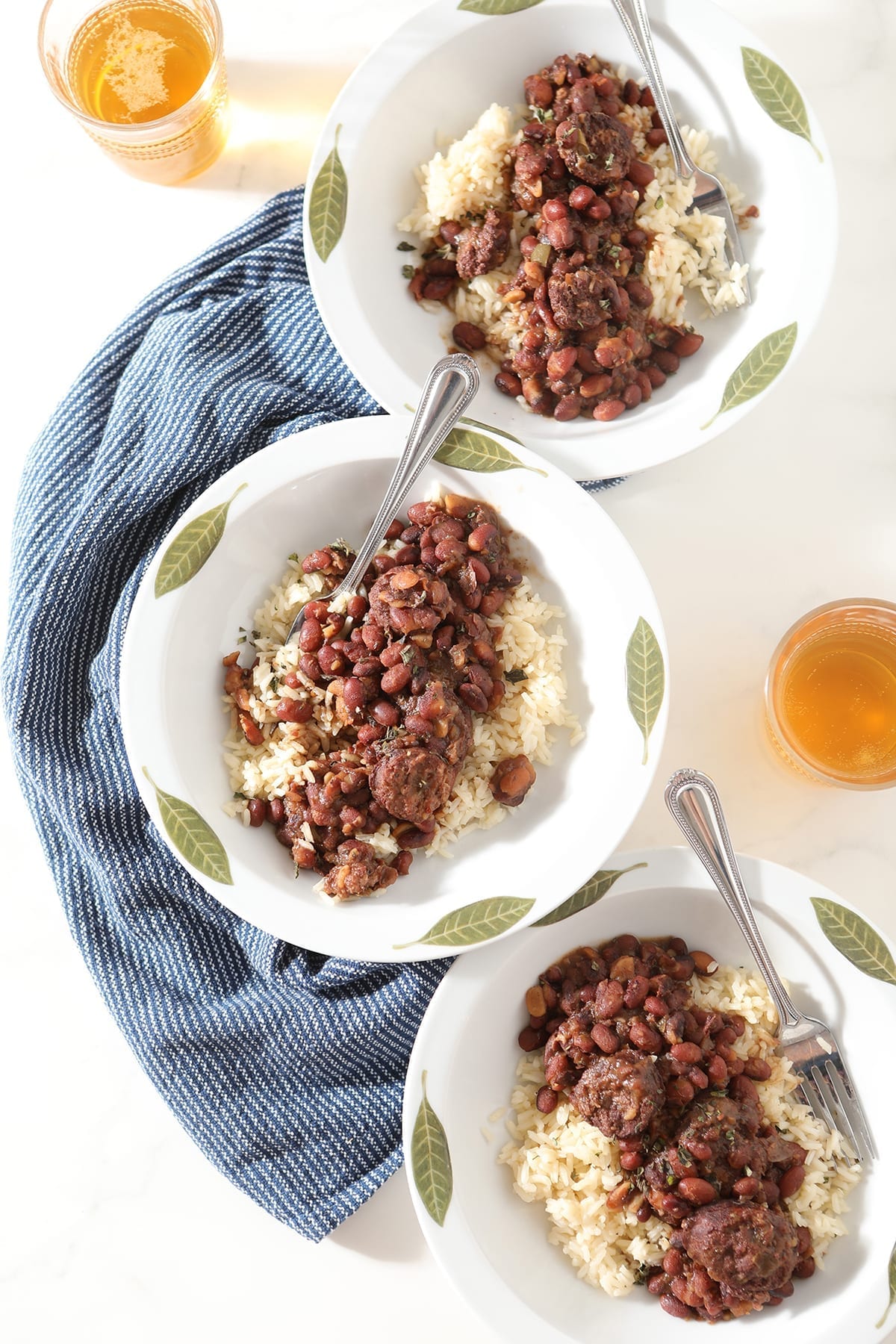 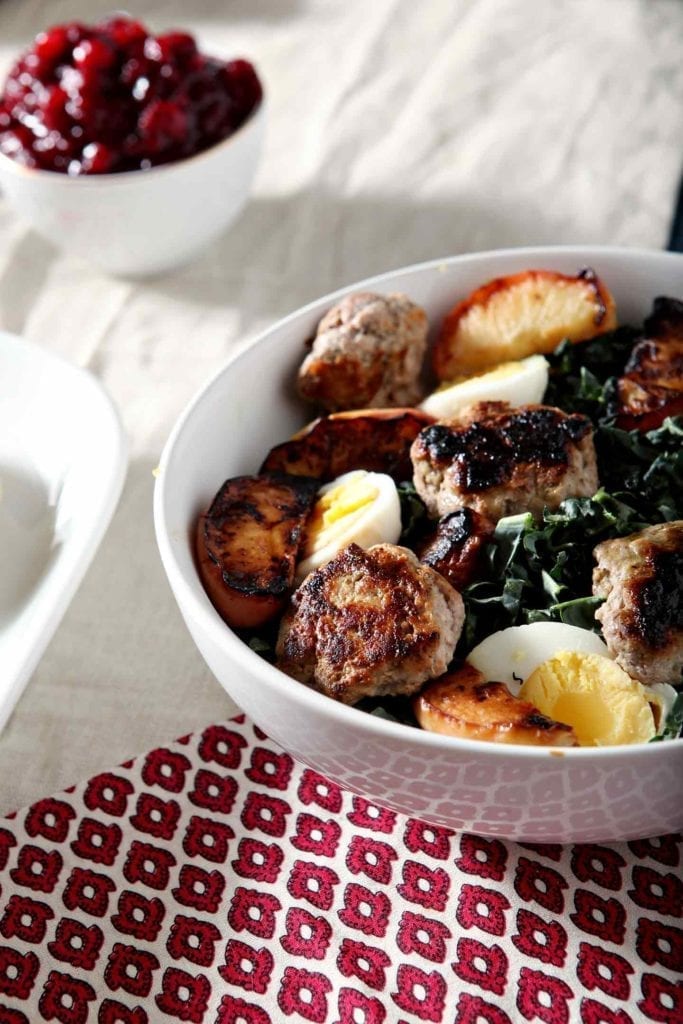