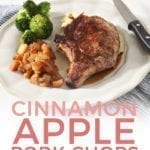 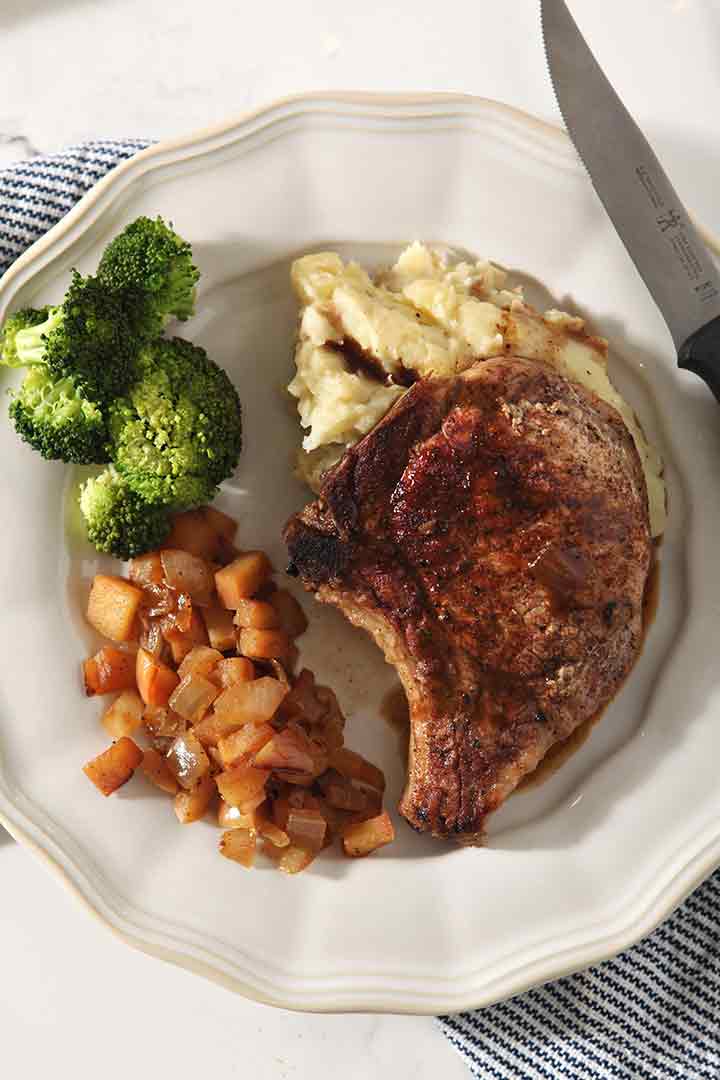 They’re classic combinations. And it wouldn’t surprise me if we all had nostalgic moments with these pairings.

For example, I have distinct memories of eating a spicy, glazed pork tenderloin with applesauce as a kid. And then topping that applesauce with some cinnamon to give it a little uumph. (And to this day, I will eat a big bowl of unsweetened applesauce topped with ground cinnamon because I love it.)

This pork and apple recipe was inspired by one a friend shared once upon a time. And it’s become a classic in our house because it’s delicious and relatively easy to throw together on a weeknight. 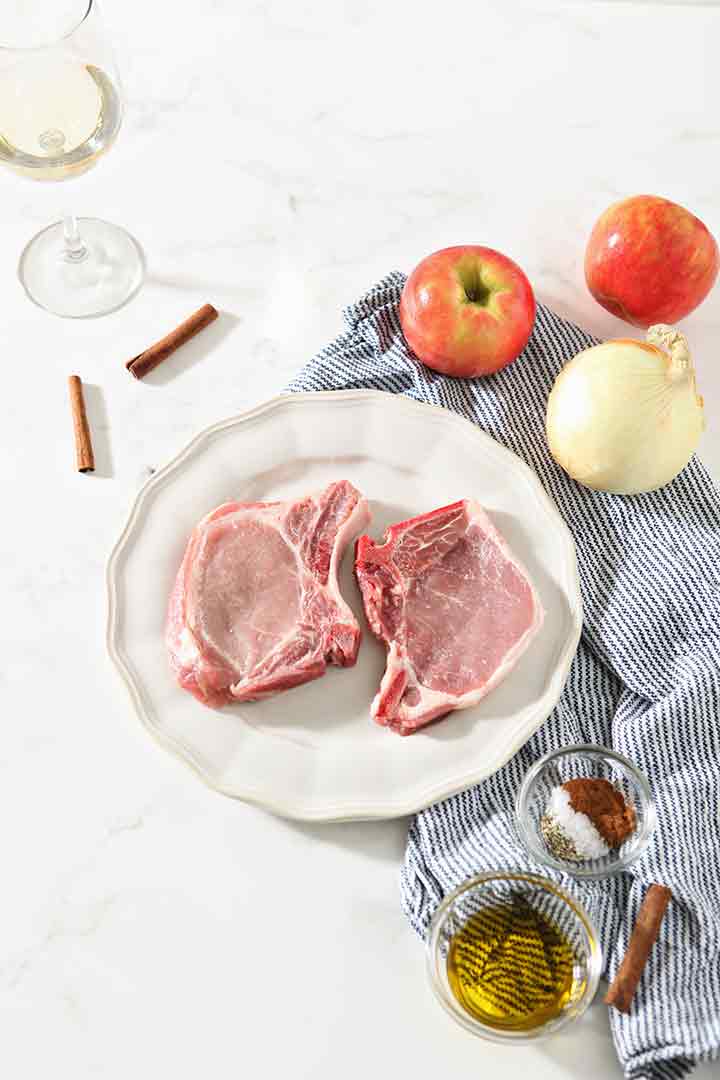 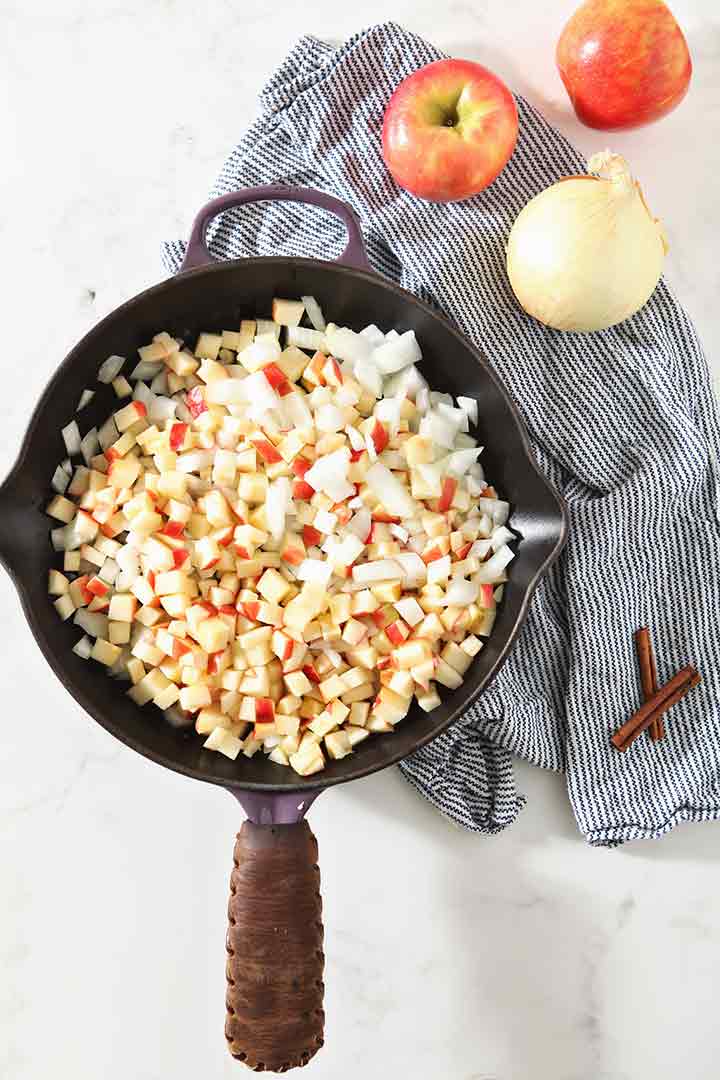 Prep and Cook the Apples and Onion

Using a sharp knife, chop the apples and onion into bite-sized pieces.

Heat olive oil in a large skillet over medium-high heat.

Add the apples and onions, and cook ’em until they’ve gotten some color, about 10 minutes. You don’t want them to get super soft, though, so when they start to brown, remove them from the pan. 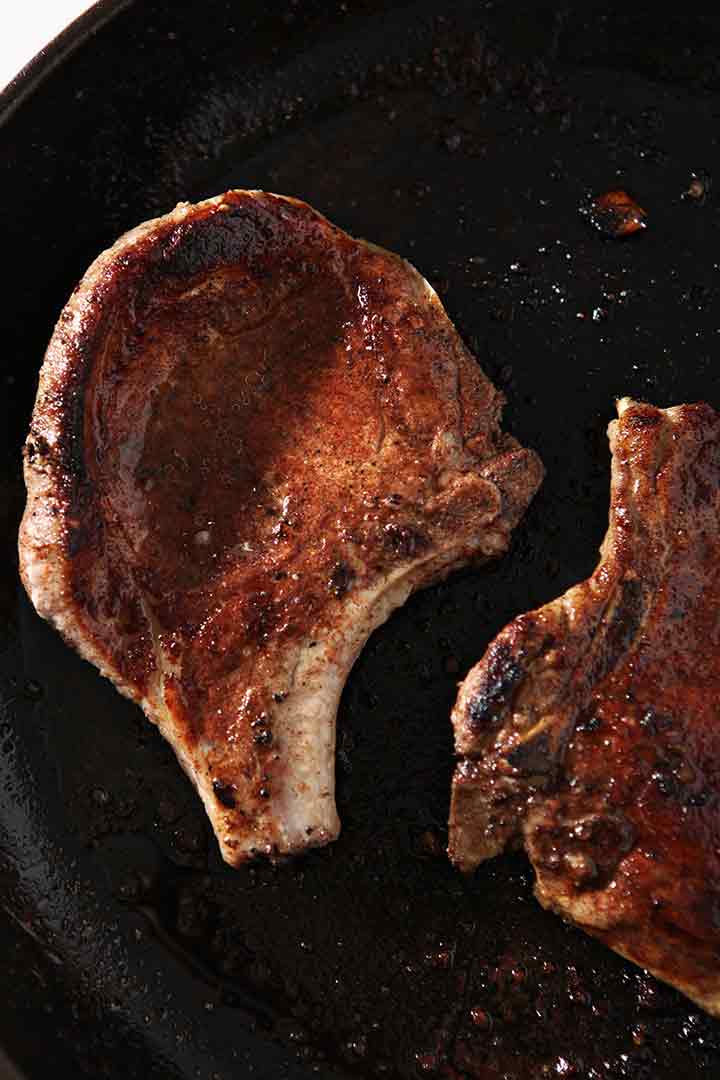 Prep and cook the pork chops

Season the pork chops on both sides with cinnamon, salt and pepper.

Turn up the heat on the skillet to medium-high so you can sear the chops. Drizzle in the rest of the olive oil, too.

When the pan is hot, place the pork chops in it, and sear them. Don’t give into the temptation to move them around the pan constantly. For them to get a good sear, they need to stay still.

When the bottom side of the pork chops are browned, flip using tongs and sear the other side until browned, too. 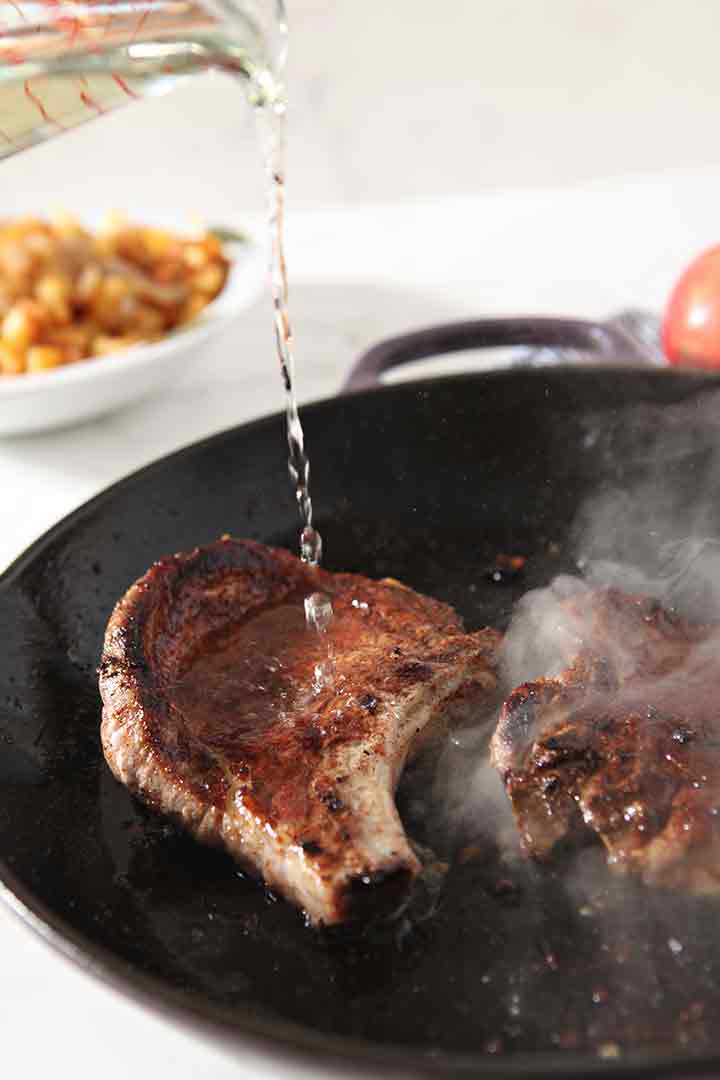 When the pork chops are browned on both sides, add wine to deglaze the pan. Use a wooden spoon to scrape the bottom of the pan to remove all the browned bits. (This is flavor, y’all, so don’t skip this part!)

Sear the pork chops over medium-high heat until browned on the outside, then add the wine to the skillet and cook it down.

Gently place the pork chops, apples and onion back into the pan.

Turn down the heat to medium-low, and cook until everything is caramelized and the liquid has mostly evaporated. This will take another 15ish minutes.

Depending on the thickness of your pork chops, they might need extra cooking time. (Mine are generally around 1″ to 1.5″, but I know some are a lot thicker.) Take their temperature and ensure they’re cooked to 145°F because that’s imperative.

When the pork is cooked through, serve warm with your side dishes of choice and enjoy. 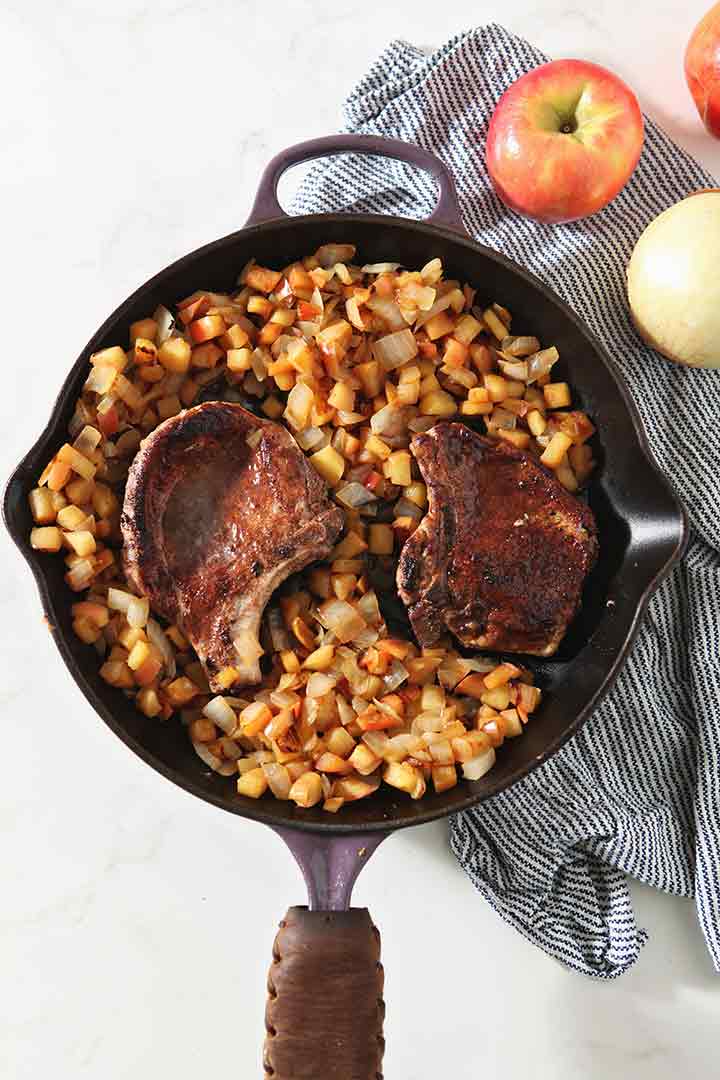 Erin’s Tips for Getting Dinner on the Table

There are a few things to make dinnertime less stressful as you’re making these Apple Cinnamon Pork Chops: 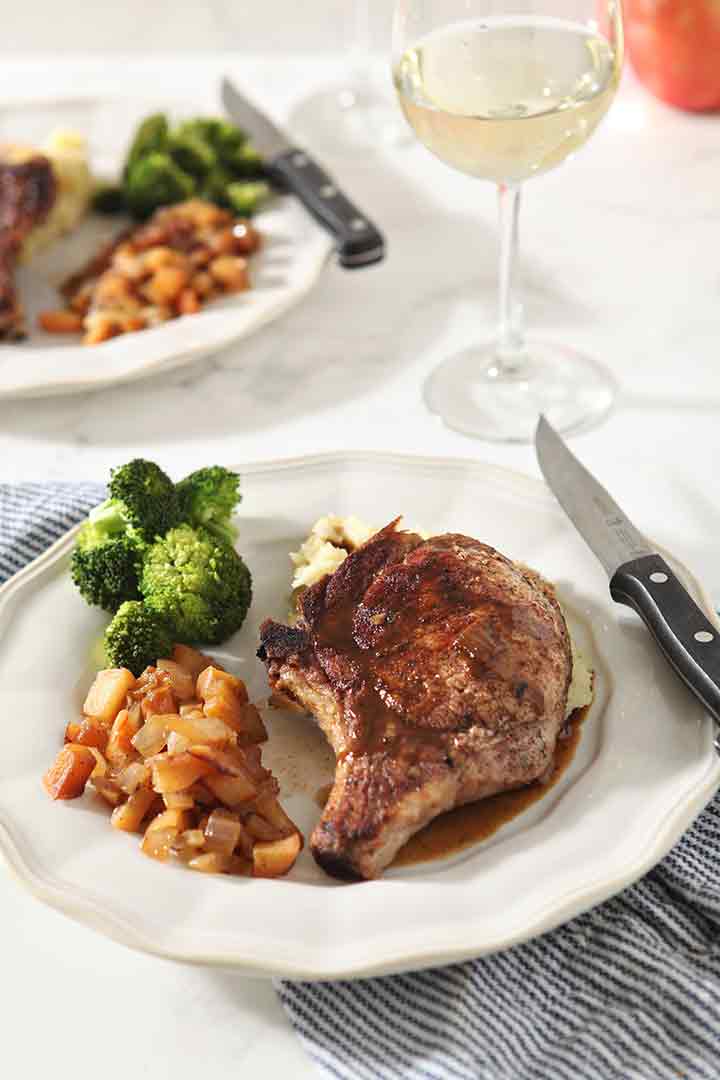 How do you sear meat?

If you sear something, you’re cooking it over a high heat for a short period of time.

In this pork chop recipe, we sear the pork chops over high heat before turning down the heat and letting them continue cooking until perfectly done.

How will I know my pork chops are cooked through?

Take their temperature with a kitchen thermometer!

The pork’s internal temperature should read 145°F. Take the temperature by inserting the thermometer into the thickest part of the pork chop and getting the reading. 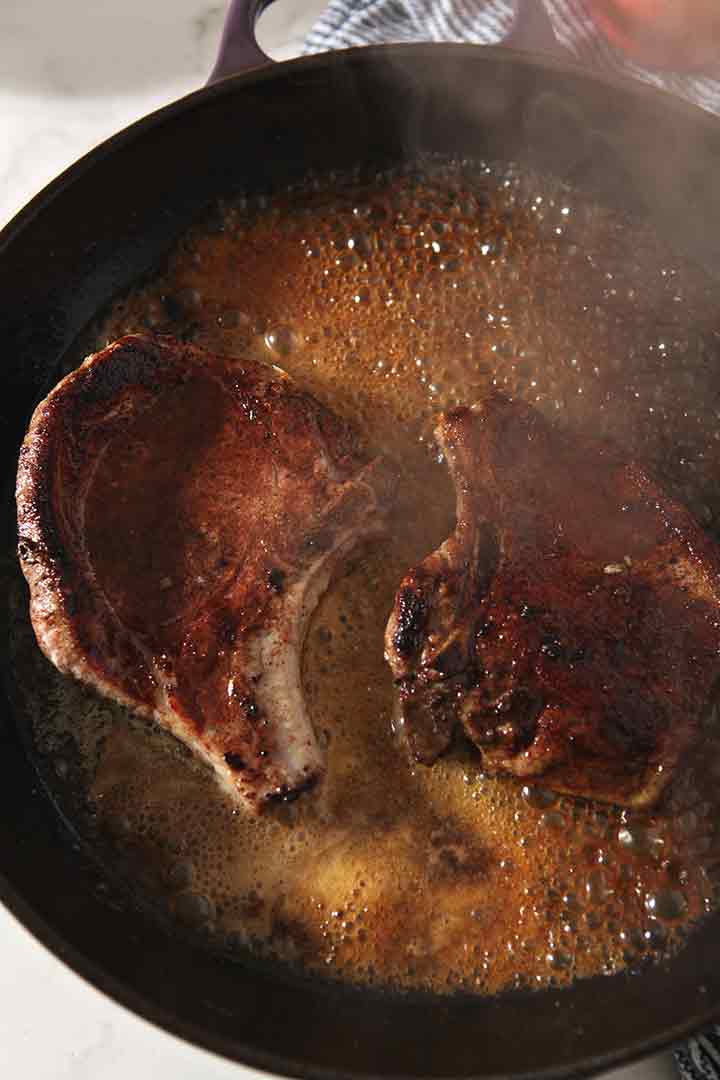 Does the wine actually cook out of this pork chop recipe? Can I feed it to my kids?

So… when you add alcohol to any dish, the alcohol doesn’t completely cook out unless you cook it for a certain amount of time. (This article from Food Network is enlightening if you want to learn more about the process and how much alcohol remains in your food.)

If you want all traces of alcohol gone from your food, it needs to cook for 3 hours. (The caveat here is that some cooking methods are less effective than others.)

The Food Network article cites a study from from the USDA’s Nutrient Data Lab, which states that any food baked or simmered with alcohol for 15 minutes still retains 40% of the alcohol. If it cooks for an hour, 25% of the alcohol remains. After 2.5 hours, 5% of the alcohol is still in the dish itself.

This recipe calls for ½ cup (or 4 oz.) of white wine. We’re simmering this dish for 15-20 minutes after the wine is added, so about 40% of the alcohol in the white wine remains.

If you don’t feel comfortable feeding this to children, I get it. You can use chicken or vegetable stock in place of the wine. 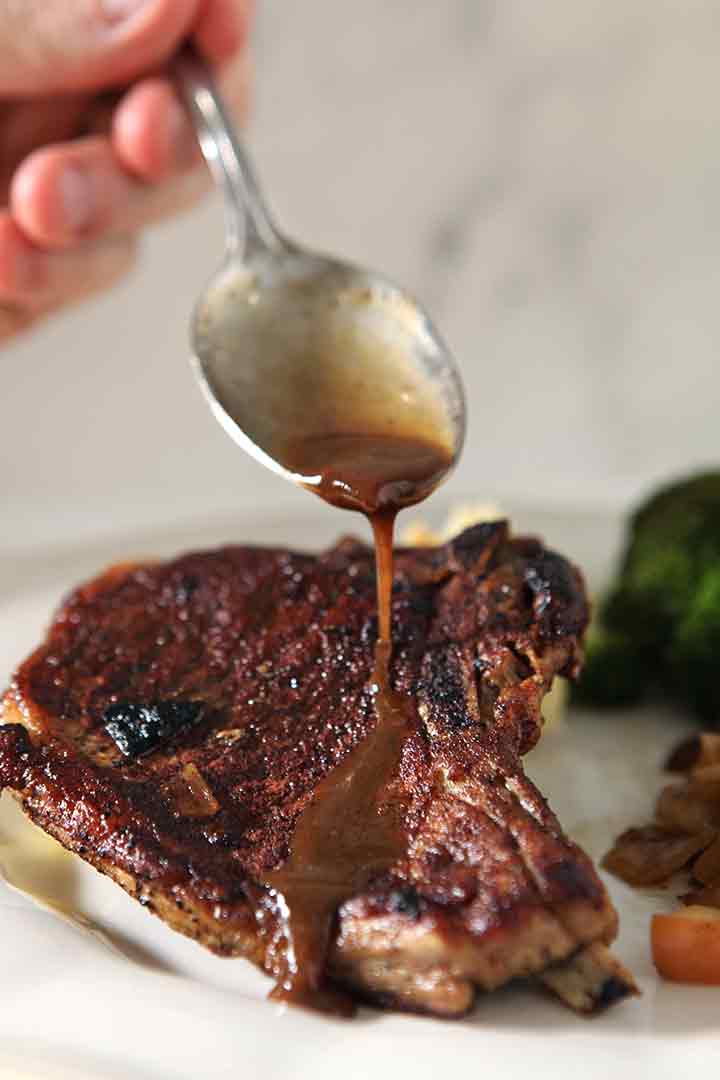 What side dishes can I serve with these pork chops?

These seared Cinnamon Pork Chops are topped with sweet, caramelized apples and onions and served warm. This dish is the perfect kind of sweet and savory weeknight meal.

How will I know when the pork is cooked through? The thickness of the pork chops will determine how long they need to cook. (The thicker they are, the longer they'll need.) The pork's internal temperature needs to be 145°F to be considered done. Insert a meat thermometer into the thickest part of the pork chop to take the temperature before removing the chops from the heat.

Substitution alert: If you don't drink or are feeding children these pork chops, you can use chicken or vegetable stock in place of the white wine.

What is your favorite food pairing?

The photos and recipe for these Cinnamon Apple Pork Chops were originally published on January 14, 2013. The photographs, along with the text of this blog post, were updated on September 16, 2019.