You are here: Side Dishes » Winter Vegetable Hash 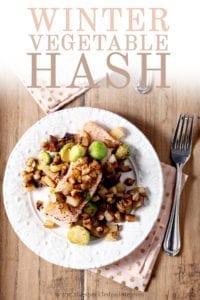 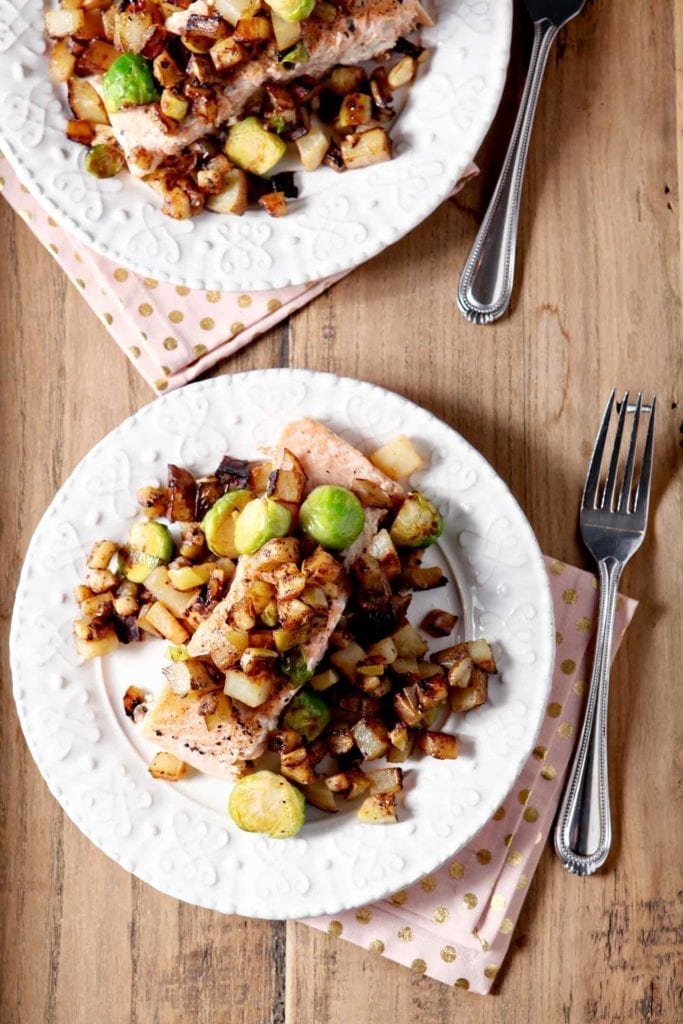 A few months ago, I received a text from a dear friend saying something along the lines of, “Do y’all eat salmon?”

We eat salmon weekly, so I responded with a resounding, “YES,” curious as to why she was asking.

Her next text said it all: “We have a Blue Apron box with salmon. My husband can’t eat it, and we need someone else to take it.”

Hesitantly, I agreed… because while we love salmon, I was skeptical of the whole box-in-a-dinner thing.

Not because I don’t think these boxes are worthwhile. I actually think they’re amazing. They’ve encouraged several of my non-cooking friends to make tasty homemade dishes and try something new… but I felt like they’d be lost on me since what I do is cook at home.

Turns out, I was completely wrong.

The box contained ingredients for a simple supper for two: Pan-Seared Salmon with a Brussels Sprouts, Potato and Turnip Hash. It also included a tart browned butter apple dressing to go on top of the veggie hash.

So I got to work… and it was one of the best meals we ate that week.

And since it was so good, I’ve been recreating it in our kitchen with ingredients I picked up from the grocery.

I also adapted it because we’ve been head-over-heels IN LOVE with this hash business. And that’s what I’m sharing with y’all today.

My recipe makes enough for four, though if you and yours want to enjoy this for just the two of you, it’s all good. ALL the winter vegetables! And then a tart (dairy-free!) apple hash to go on top of ‘em. What’s not to adore? 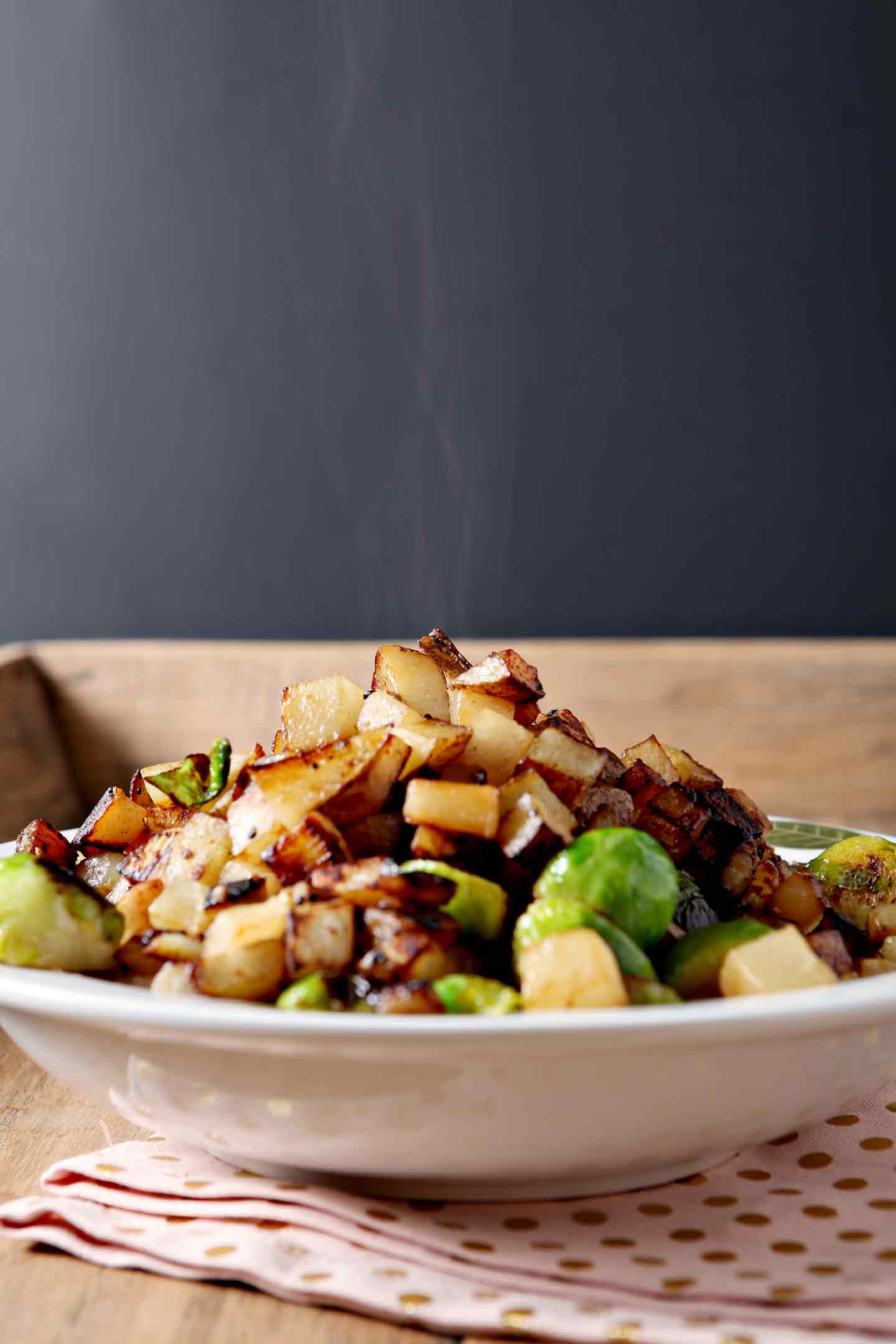 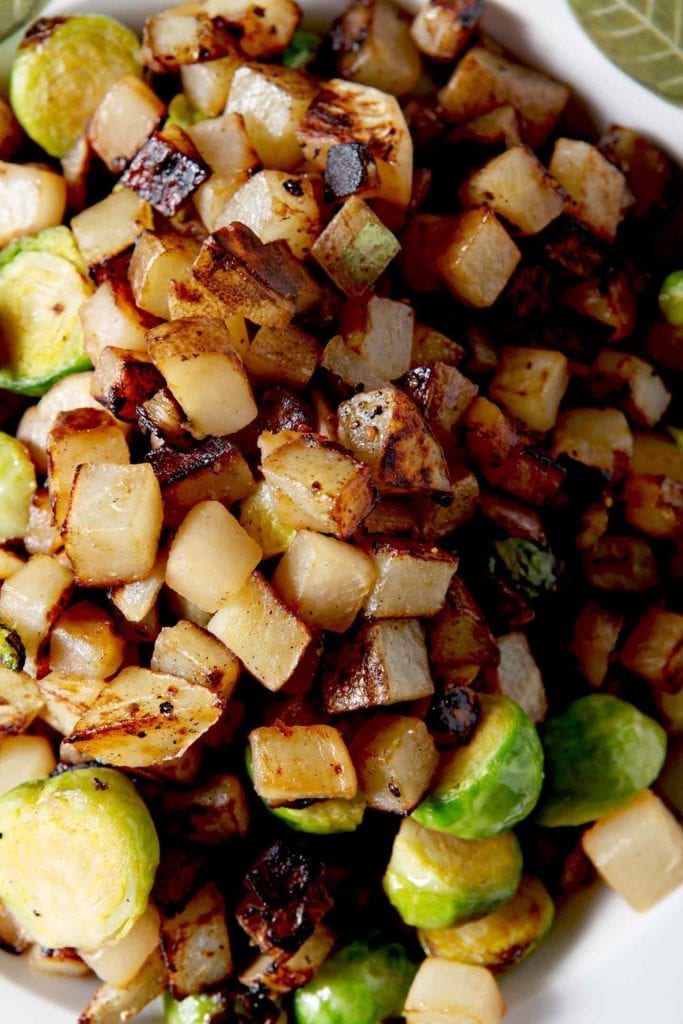 How to Make this Winter Hash Recipe

Using a sharp knife, dice the apples into ½” bite-sized pieces. You don’t want ’em to be too large, because they need to be bite-sized.

After the apples are chopped, heat the oil in a nonstick skillet over medium-high heat.

Add the apples, and stir them constantly around the pan as they cook. Season with salt and pepper, and then add in the Dijon mustard. Cook ’em for 5-7 minutes, or until they’re browned and soft, but not mushy.

Squeeze the lemon juice on top of the apple, and remove it from the pan. Set aside for later.

Dice the potato and the turnip into ½” pieces, just like you did with the apple. The key here is so that everything is around the same size and that it’s bite-sized.

Using the same pan, heat the olive oil over medium-high heat. Once warm, add the potato and turnip. Season ’em with salt and pepper.

Cook the potato and turnip for 5-10 minutes, or until they begin to get a brown crust. This happens when you don’t move them around the pan a ton, so let them sit for a bit to get this crust!

Add the Brussels sprouts, and cook for another 5-10 minutes. Please remember that you want everything to soften and get brown, but not become a mushy mess.

Remove the skillet from the heat, and squeeze the lemon juice on top of the hash.

Serve the Vegetable Hash Recipe with the Apple Hash over fish or chicken, and enjoy warm! 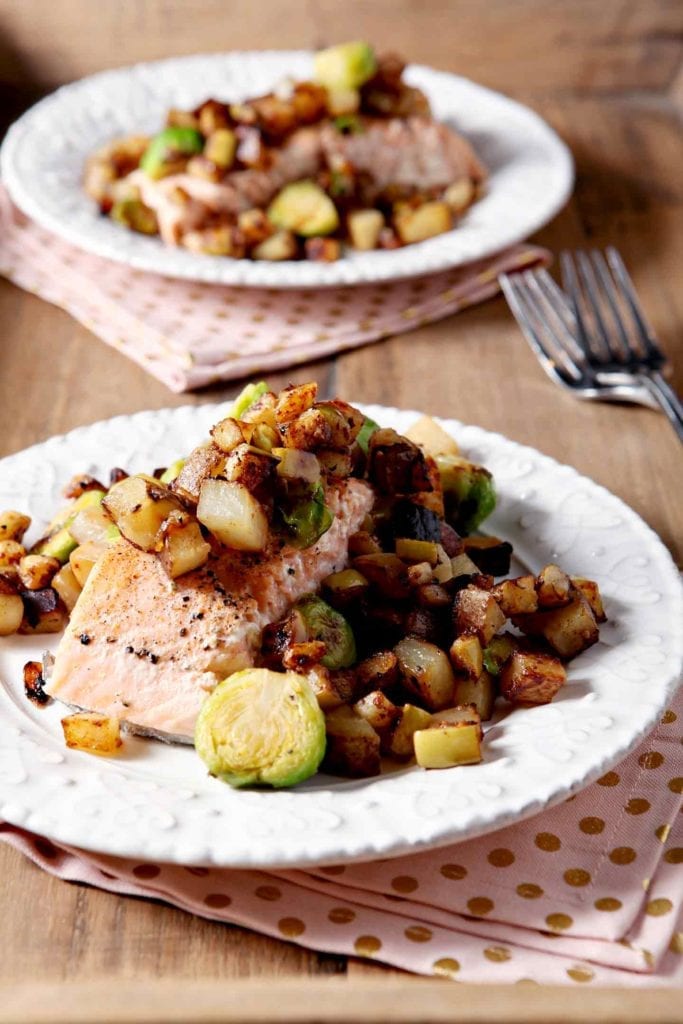 This potato hash recipe would be delicious to serve for dinner when you have guests over!

The nature of a hash doesn’t allow it to be something that you can make in advance, though. However, there are a few things you can do to make this recipe easier to make when guests are coming over: 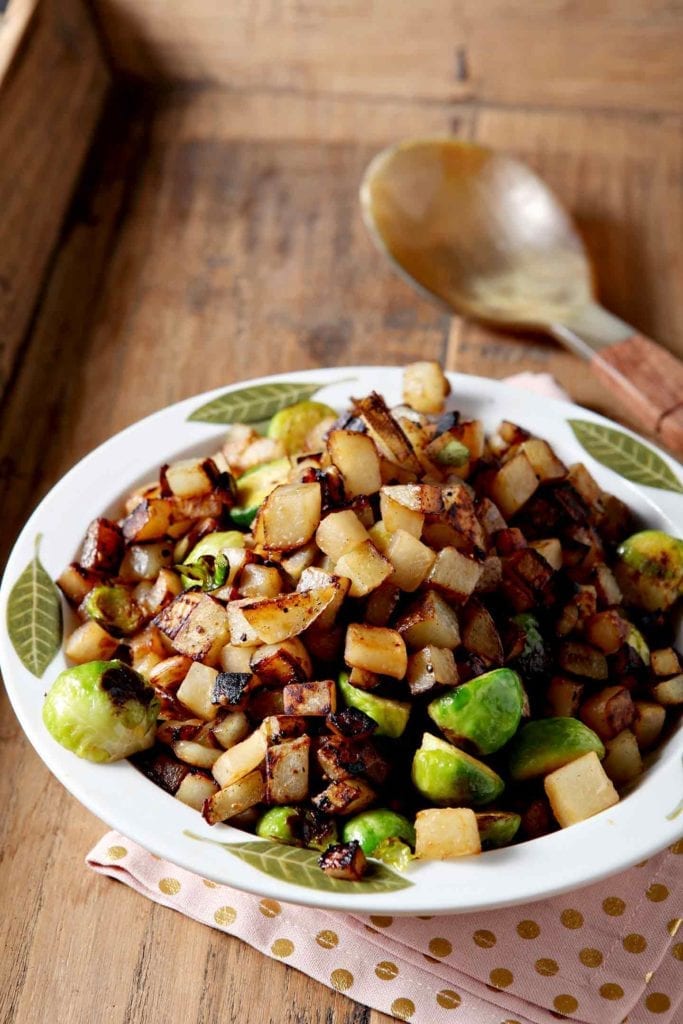 What proteins can I pair this hash recipe with?

I don’t like all the ingredients of this hash recipe. Can I leave some out?

Sure! Though depending on which ingredient you leave out, the hash will have a different overall flavor.

That said, you can pick and choose what makes you happy with a hash like this, so feel free to use extra potatoes and leave out the turnips if those aren’t your thing, or vice versa.

Can I make this hash for Thanksgiving or Christmas? Is that weird?

Personally, I think that’s a brilliant idea! This would pair beautifully with a turkey or a ham, so make a big ‘ol batch of this goodness, and serve it up at your family’s (or a friend’s) holiday gathering. 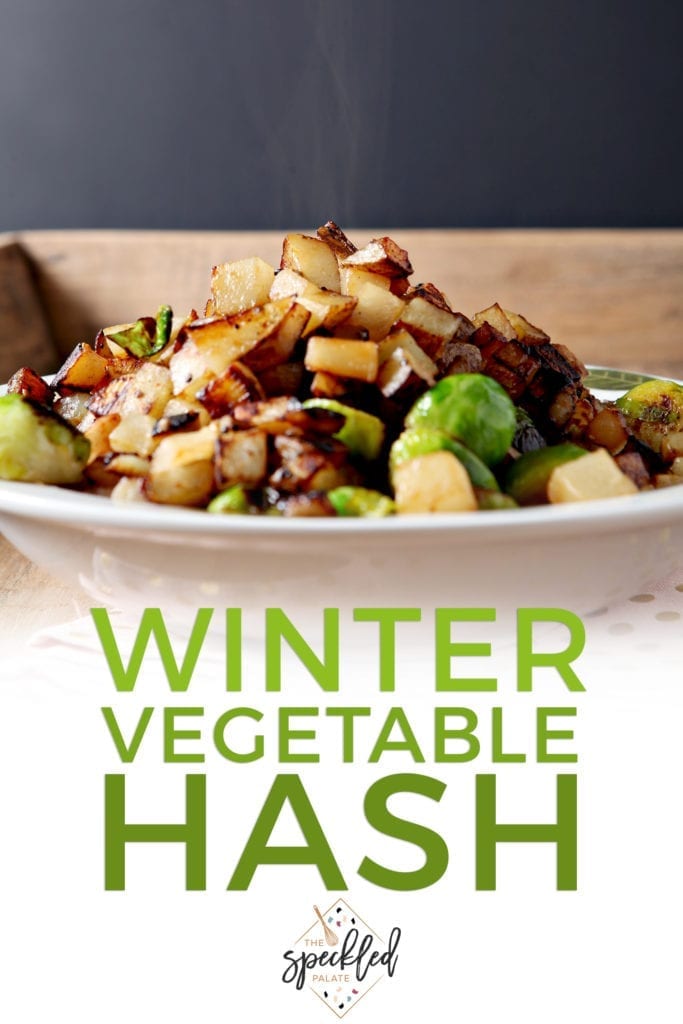 Here’s how you can make this delicious side that is PERFECT on top of fish or chicken… or simply by itself!

Let's make Winter Vegetable Hash! This hash features winter veggies like potato, purple turnip and Brussels sprouts and pairs with a tart Granny Smith apple hash to top your favorite protein. Apples cook in olive oil with Dijon mustard, then are kept warm while the potatoes and turnips crisp up and soften. Add Brussels sprouts to the mix and cook until browned. Enjoy the wintertime vegetable harvest by enjoying Winter Vegetable Hash with dinner.

Have you ever tried a meal box subscription service before?