Serve Shredded Applesauce Chicken Sliders with Brussels Sprouts Apple Slaw at your next tailgate! These sliders can be made in advance for an easy entertaining the day of. Chicken slow cooks with applesauce and other fall flavors before it’s shredded. Reduce the cooking liquid to be used as a sauce, then shred Brussels sprouts and apples and toss in a yogurt-apple juice dressing. Serve the sliders on buns, and enjoy! Gameday never tasted so good! 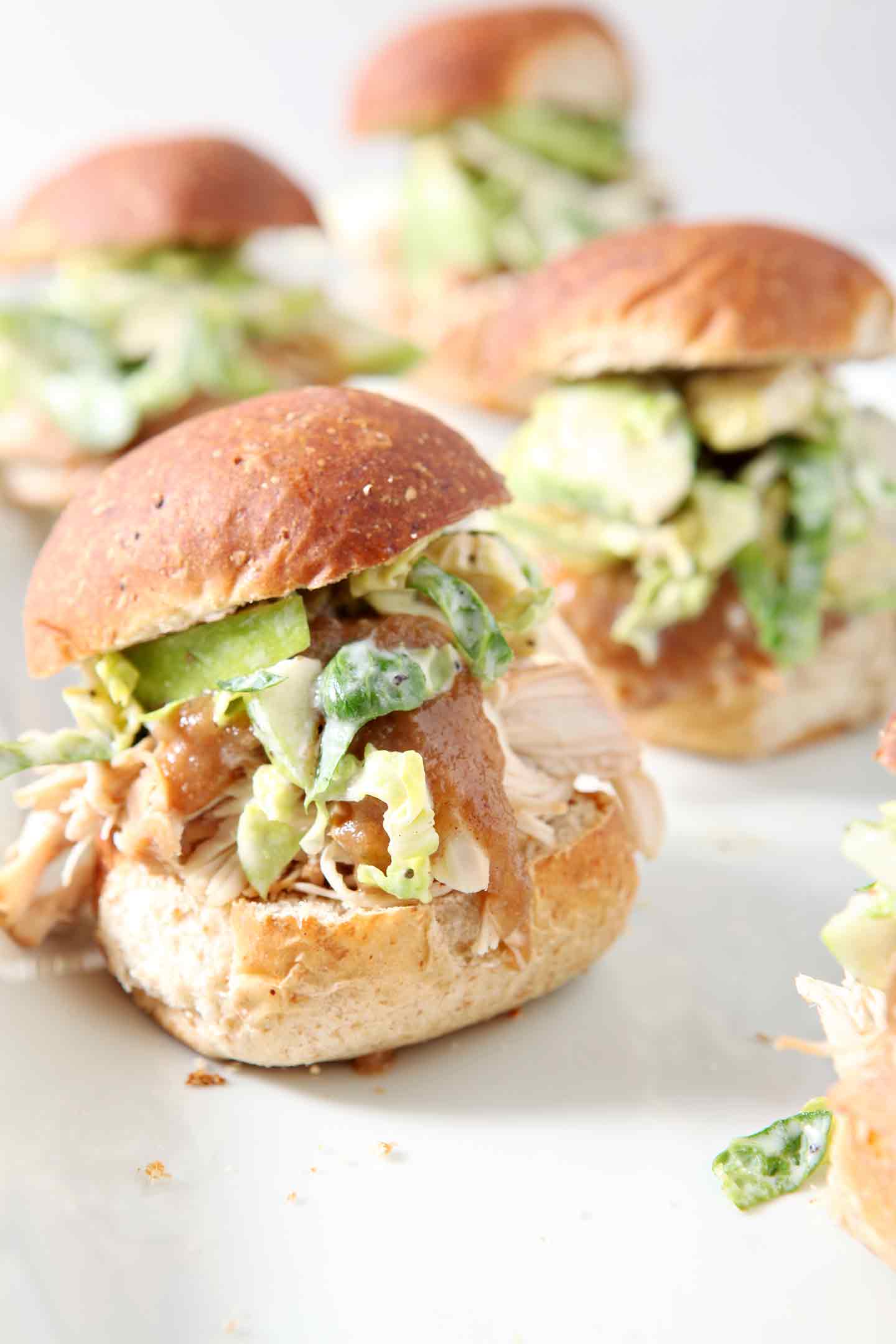 Tailgating is a way of life down here in the South, and I like to think I learned from the best while attending LSU.

Not to toot our horn or anything, but gameday at LSU is something else, and it’s a delicious endeavor.

Not only are you fed by your friends and family, but as you walk around, strangers (and friends of friends of friends) happily invite you to partake in their tailgate festivities, offering food, drinks and company as you prepare for the game later in the day. 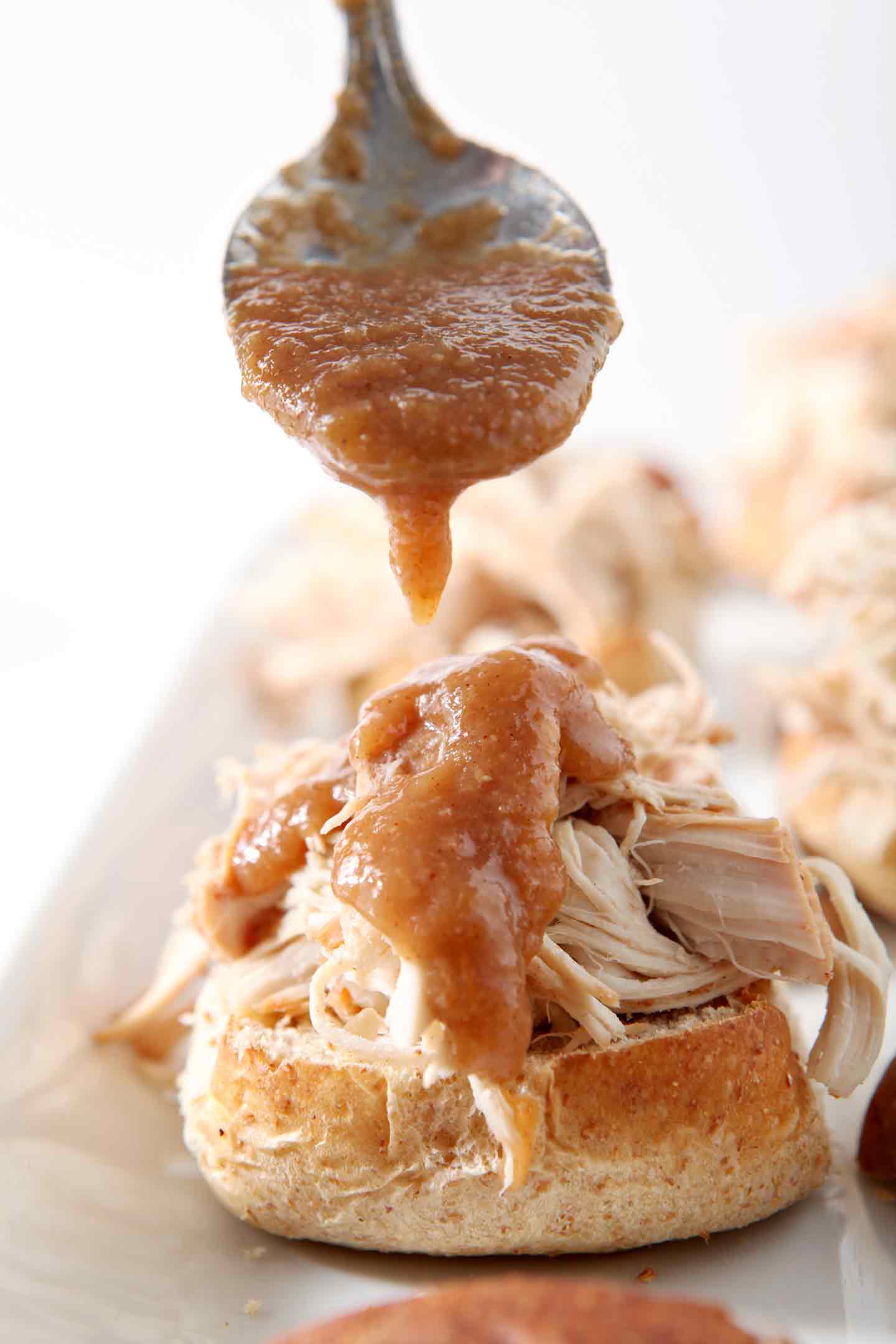 So when fall rolls around and football season begins, I always want to make tailgate recipes, whether or not we’re making the trek to Baton Rouge (or another locale) to cheer on our beloved Tigers.

And I got my first chance to do that this year when my friends at Sprouts approached me about creating a game day recipes with some serious fall flavor to celebrate their partnership with Amazon Prime Now for two-hour grocery delivery in select regions. 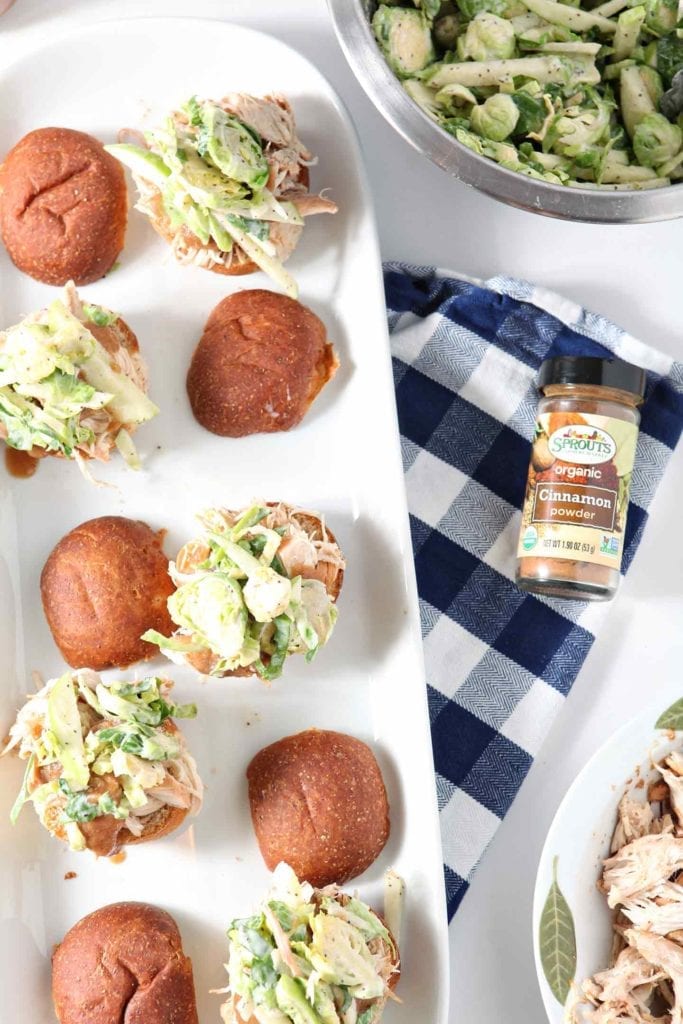 These Shredded Applesauce Chicken Sliders with Brussels Sprouts Apple Slaw are everything I want in a tailgate entrée.

They’re savory with a bit of sweetness.

They can be held easily (and not so messily) in hand for when you want to walk around. 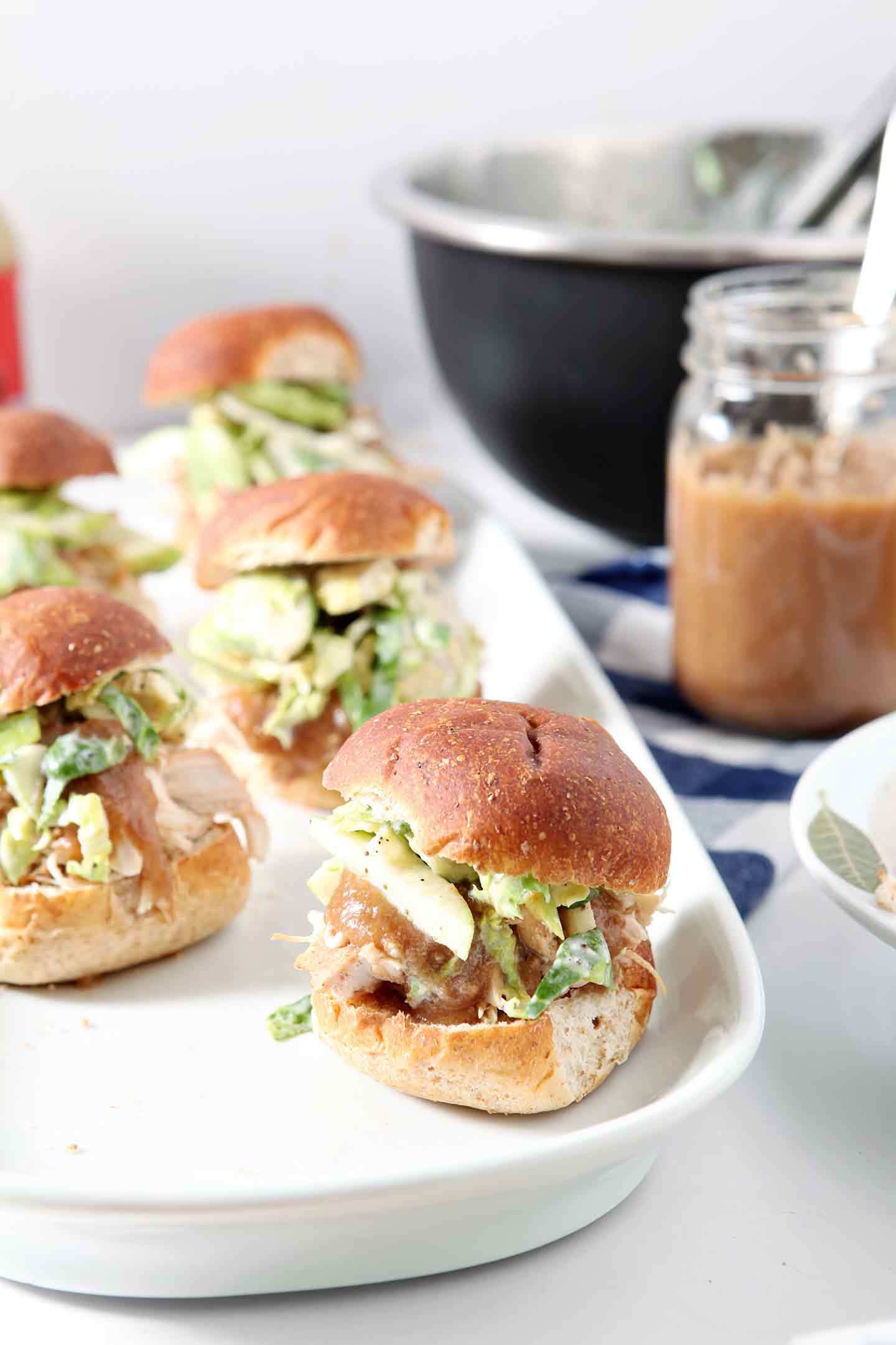 When these beauties were cooking, my entire home smelled of fall flavors, and it made me so happy. Because even though it’s still warm outside here, fall will arrive. Eventually. 😉

I highlighted several of my favorite Sprouts apple products, including a sugar-free organic applesauce and a Gala apple juice varietal that’s delish!

Oh, and there are apple slices in that Brussels sprouts slaw. Because fresh apple goodness, on top of all the apple-y deliciousness in the chicken, just puts it over the top! 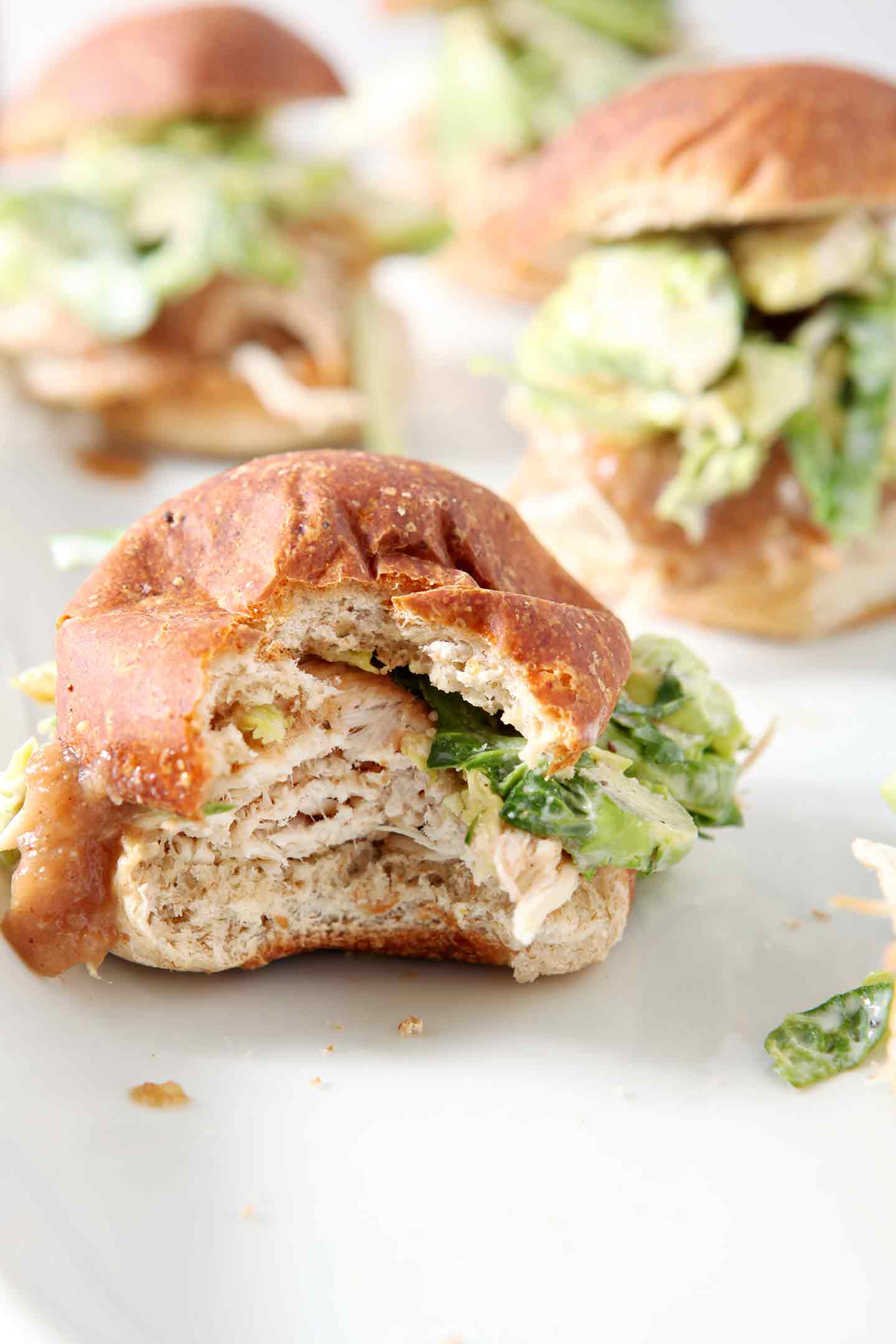 Now who’s ready for a slider or ten? (Want more sliders? I highly suggest checking out my BBQ Chicken Burger Bites and these Pork Tenderloin Sliders, too!)

Scroll on down to learn how to make this goodness for your next tailgate, homegate or even a weeknight dinner. Either way, it’s a wonderful meal!

Serve Shredded Applesauce Chicken Sliders with Brussels Sprouts Apple Slaw at your next tailgate! These sliders can be made in advance for an easy entertaining the day of. Chicken slow cooks with applesauce and other fall flavors before it's shredded. Reduce the cooking liquid to be used as a sauce, then shred Brussels sprouts and apples and toss in a yogurt-apple juice dressing. Serve the sliders on buns, and enjoy! Gameday never tasted so good!

Make the Sauce + Cook the Chicken

The slaw will need to be made the day of so the Brussels sprouts and apples don’t become soggy. However, you can mix the wet ingredients and refrigerate overnight.

Don’t skip the sauce reduction step. While the sauce is delicious when it comes out of the slow cooker, it’s very thin. This could cause it to soak through the slider buns too quickly, making them soggy. The reduction allows for the chicken to sit on the buns for longer, allowing you more time to put these together and serve without worrying about the sliders turning to mush in someone’s hands.

Could I interest you in a slider?