You are here: The Speckled Life » That time I decided to train for and actually RUN a half marathon…

A year and a half ago – the summer before my wedding – I decided I was going to run a half marathon to help kick my butt into shape for our wedding day. Well, things got crazy at work, and I didn’t sign up for the race, and then it was sold out. So basically, I didn’t do the half marathon I had planned on before my wedding because of all of the factors that came together. However, I was still determined to do a half marathon sometime in the near future.

During that time, my dad actually signed me up for the St. Jude Half Marathon in December 2010, and I told myself I would have more than enough time to train because certainly work would not remain crazy. It remained crazy, and I didn’t put in the time to train for the half marathon, again, because life was a little out of control at the time. However, I still wanted to do it, and I ran/walked the half in 3:04, which was a pretty impressive feat since I had not stuck to my training plan and had never gone that far before. Ever.

(Thanks to my dad’s wife, Mindy, for documenting the celebrations after we finished the race.) That’s me with my parents, who both ran and ROCKED the St. Jude Half. Yes, we’re drinking beer. Because that’s apparently what you do after you run a half marathon, no matter how awful you actually feel. The second image is me with my dad right after crossing the finish line. My legs were majorly cramped and sad, so I lied down on the grass and stretched because I felt like death. No, really.

After the St. Jude, I caught the fever. It was incredible running with so many people cheering you on, and I wanted to actually get down to business and train for a race, then proceed to rock it because I knew I could do so much better than a three hour half. (It should be noted here that while I am not a competitive person anymore, I played competitive sports for YEARS and kind of have a thing for winning.)

So I signed up for the Tom King Half Marathon in Nashville for March in preparation for the Country Music Half Marathon, which is at the end of April in Nashville. I told myself I would have more than enough time to train for both races, and they would be fantastic.

I thought wrong. Work got crazy, once again, and instead of using the Tom King as a pacer or a test for what I could do for the Country Music, it ended up being an extended walk. Luckily, one of my hardcore marathon friends introduced me to another one of her friends, who had also signed up for the race and didn’t put in the training time, so she and I ran and walked together, discussing anything and everything we could think of during that time. Melissa and I bonded during that time, and we promised ourselves that once we hit the stadium, we would run the final tenth of a mile to the finish line.

And we did. I crossed at 2:58 and some-odd seconds, beating my old PR by a good six minutes. 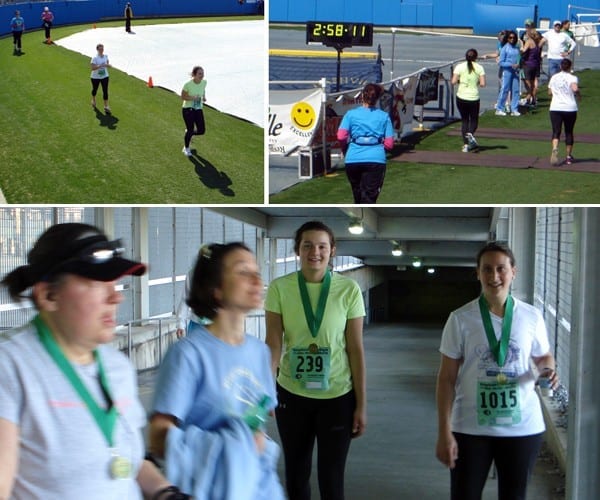 (Major thanks to my sweet husband and mom who took these photos!) Clockwise, from top left: That’s me and Melissa approaching the finish line in LP field and crossing almost at the same time. The bottom photo was taken as we were exiting the stadium after receiving our medals.

I was tired after the Tom King, but no worse for the wear, and I swore to myself I would prepare for the Country Music. And I did, kind of, before things got hectic at work (again), and I was working 12+ hour days. It should be noted that I did quite a few long runs, including a final long run of 11 miles with one of Winston’s law school friends around the race’s actual course a few weeks before it. And while it was a long

, painful slog, I made it. And this, I think, made the difference in this race for me.

So when the Country Music actually came, I was a little nervous because I was unsure how I would handle the entire course since it was going to be much more challenging than the Tom King and the St. Jude, as Nashville is surprisingly hilly.

I started off with the group expecting to run a 2:15 half (because, with these large races, you sign up in waves and predict what time you’re going to finish. I clearly had high hopes for myself when I signed up for the race around Christmas.) Around mile 2, I had to stop at the port-a-potty, and lost at least 5 minutes while waiting in line. But then I was back in the race, and I was feeling pretty good throughout the entire course. Before I knew it, we were at the 10K mark. And then we were in downtown Nashville, running through the Farmer’s Market. And then we were by my office, then running over the Cumberland. And then sprinting to cross the finish line.

… You must be wondering why I’m telling you this, right?

It’s not to prove that I’m a little off and a little crazy and a little dumb for running THREE half marathons without the proper training. I know I’m lucky I didn’t get hurt at any of these, and when I think back to them, I cringe a bit at what could have been.

I signed up for another half marathon. This time, it’s down here in Louisiana. It’s in January. And as of two weeks ago today, I started training for the race.

This time, I’m really training. And this time? I’m changing up my diet a little bit to help. (Even though I will wholeheartedly admit that one of the reasons I run is because I LOVE TO EAT.)

This doesn’t mean I’m going to stop baking. Umm, y’all, Thanksgiving and Christmas are just around the corner, and this girl sticks to a strict baking regiment during the holiday season because it’s a tradition. I just might not be eating as much as I have in years past because, you know, I sincerely doubt that butter and sugar fuel the most serious marathoners.

I’ve started a new journey in fitness, and I hope y’all join me on this. If you’re a runner, I would love to know what you’re eating as you train. And if you’re not, I hope you can find some use for these dishes in your life because they really are tasty!